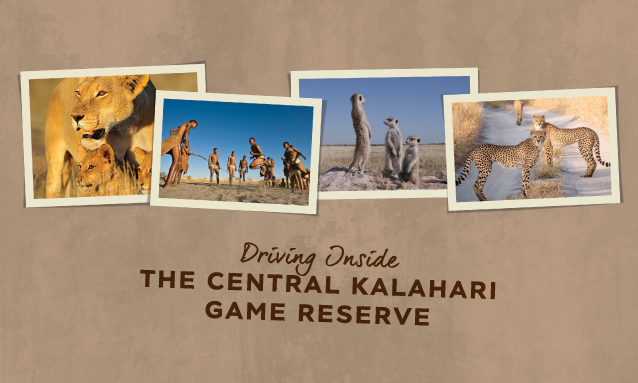 The Central Kalahari Game Reserve, or the CKGR as it is commonly known, is an immense 52.800sq km and we only visit part of the portion located in the Northern area. The northern part is the most visited because it is where you are most likely to spot the animals, although it is not a park where sightings are easy and frequent. Some species such as elephants and buffaloes are not common residents, although it’s not uncommon for some male elephants to visit after the rainy season.

The Central Kalahari Game Reserve is the ultimate ‘remote’ safari destination. It covers over 50,000km², most of which is still inaccessible, particularly to the south. Although there have always been small groups of Bushmen living in the reserve, the northern part has only recently become more accessible to the public. Even now, this region is seen by only a handful of visitors every year.

The Central Kalahari Game Reserve is larger than Denmark or Switzerland, and bigger than Lesotho and Swaziland combined! The 52,800 square kilometre Central Kalahari Game Reserve, which was set up in 1961, is the second largest game reserve in the world. Situated right in the centre of Botswana, the reserve is characterised by vast open plains, saltpans and ancient riverbeds.

Varying from sand dunes with many species of trees and shrubs in the north, to flat bushveld in the central area, the reserve is more heavily wooded in the south, with mophane forests to the south and east. Rainfall is sparse and sporadic and can vary from 170 to 700 millimetres per year.

The main reason for visiting the CKGR is because of its unspoilt nature, its landscapes, its tracks where to test your off-road and driving.  While there are sightings of animals, it is more difficult than elsewhere partly because the roads are few in proportion to the size of the park, the tall grass and bushes. Additionally,  there is a lower population density of some species.

In the dry season – the months from June to October – it is not difficult to drive on the tracks; the important thing is to deflate the tires and be cautious, observe the speed limit of 40km /h, observe the road and be on the lookout for the holes dotted along the way. It’s important to carefully calculate distances and travel times because after 6.30pm (sunset), you are not allowed to drive around the park and it can be risky being away from your campsite.

During the rainy season, however, it is not easy to drive in the CKGR since the sandy tracks are transformed into mud. At certain points, there is a particular type of soil known as black cotton which when dry is as hard as stone. By contrast, the slightest bit of water makes the surface so slippery that it’s comparable to driving on ice. Only those who are accustomed to driving 4x4s would brave the journey in the wet season. 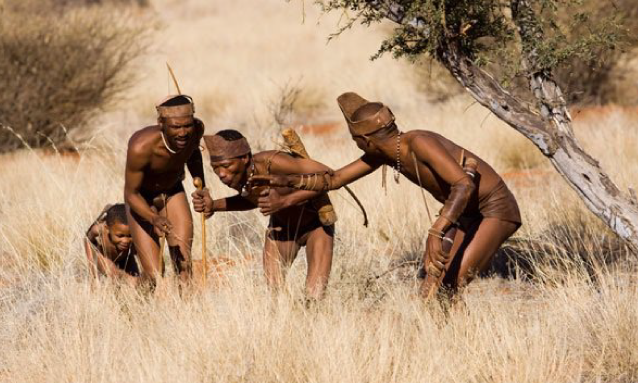 The people of the Central Kalahari Game Reserve

The people commonly known throughout the world as Bushmen – also referred to as the Basarwa or San – have been resident in and around the area for probably thousands of years. Originally nomadic hunters and gatherers, the lifestyle of the Basarwa has gradually changed with the times and they now live in settlements, some of which are situated within the southern half of the Central Kalahari Game Reserve.

Other fairly recent residents were Mark and Delia Owens, who spent many years in the Deception Valley area of the park undertaking research, mainly on brown hyena. The Owens’ book, “Cry of the Kalahari” brought the readers’ attention to this previously little-visited area and even today, many people refer to the Central Kalahari simply as Deception. The name “Deception” comes from a pan the dry surface of which sometimes appears convincingly full of water until you get right to the edge.

Most of the wildlife can be found in the tourist areas in the northern half of the vast reserve but the more adventurous and completely self-contained visitors can venture through the reserve between Khutse on the southern boundary to the northern section – a journey that takes a minimum of two days of 4×4 wilderness travelling. 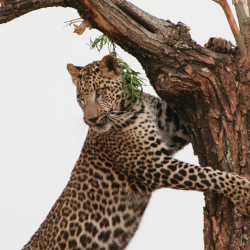 The ecosystems, wildlife and landscapes in the Central Kalahari Game Reserve differ very much to what you would experience further north of the Okavango regions. In the reserve,  you will notice a variety of species are more prolific than elsewhere in Botswana such as brown hyena, aardwolf, oryx, bat-eared fox and ostrich.

Game viewing for animals including giraffe, brown hyaena, warthog, wild dog, cheetah, leopard, lion, blue wildebeest, eland, gemsbok, kudu, red hartebeest and springbok is best between December and April when the animals tend to congregate in the pans and valleys. 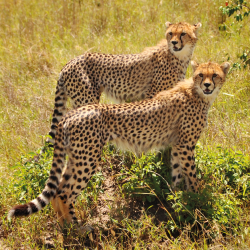 The game viewing in the Central Kalahari can seem sparse compared to the Okavango-Linyanti-Chobe region. Springbok are the most numerous of the large herbivores. Oryx numbers in the Central Kalahari are also very strong, often seen in herds exceeding 100 in the short grass plains during the rains. Red hartebeest, eland, wildebeest, kudu and giraffe can also be found in good numbers.

The main predators are lion, cheetah and leopard, although leopard are much less frequently seen. The lion prides range over large territories and are connected by loose associations. Many of the lions are solitary or live in pairs and will often hunt smaller prey such as porcupines. The Central Kalahari’s low density of predators makes it ideal for cheetah, making the reserve one of the best places in sub-Saharan Africa to spot them.

The birdlife in the Central Kalahari is varied. The largest of these, the ostrich and kori bustard, are doing extremely well and are commonly spotted. Doves are well represented with Cape turtle doves, laughing doves and Namaqua doves all seen in high numbers. 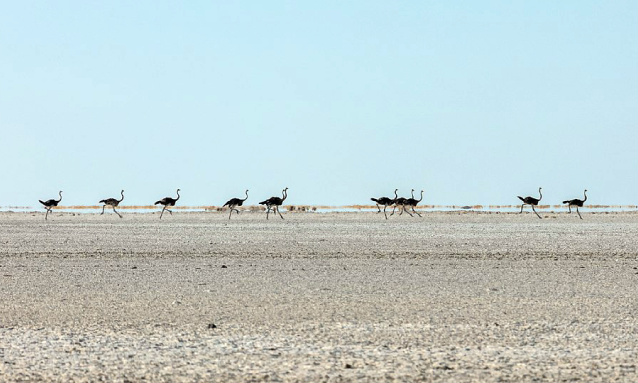 All the sub-Saharan species of sandgrouse can also be found in the reserve. During the day, these can be difficult to spot with their excellent camouflage. However, during the mornings, large numbers can be seen flying to the waterholes. Large flocks of red-billed queleas are also common, often seen as they swarm down from trees to drink or in search of food.

The Central Kalahari’s most common raptor is the pale-chanting goshawk. There are also a good number of black-shouldered kites, rock kestrels, bateleurs, black-breasted and brown snake eagles, martial and tawny eagles and lanner falcons are also around.

Visitors wishing to travel trans-Kalahari should note that, apart from being self-contained with all fuel, food and water, it’s prudent to travel in a group of two or more vehicles with basic spares and survival aids. There are three entry points to the reserve; through Khutse in the south, then a western entrance through Xade and also in the northeast through Matswere.

Access to Xade, where there are two undeveloped campsites near the Xade Wildlife Camp, is made by turning off east from the Ghanzi-Kang road about 36 kilometres south of Ghanzi indicated by signpost. Following this loose sandy track for 160 kilometres, taking about three hours for the full journey from Ghanzi leads you to Xade. 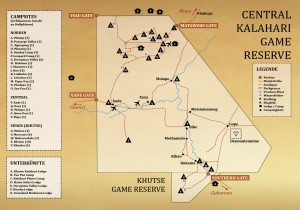 To ensure you have sufficient fuel for the entire stay, it’s a good idea to fill up at Ghanzi. On arrival at Xade, visitors are required to check in at the tourist office in the Wildlife Camp.

Access to Matswere can be made via Rakops, where petrol and diesel are available most of the time, 55 kilometres from the check-in point at Matswere. Rakops can be accessed from the north from Maun – Motopi – Kumaga – Tsoe, or from the south from Mahalapye – Serowe – Letlhakane – Mopipi.

Matswere can also be accessed from Maun by travelling 57 kilometres east, turning right at the Makalamabedi junction, continuing for 20 kilometres to the village and turning right on the western side of the veterinary fence. The fence is followed south for some 80 kilometres of sand track to the Kuke corner veterinary gate, after which a further 21 kilometres down the eastern boundary of the reserve takes you to the entrance gate, from which it is only 9 kilometres from Matswere. This “short cut” from Maun takes about three and a half hours.

Matswere is the access point for designated but undeveloped campsites in the region of Deception Valley, Sunday Pan, Leopard Pan and Passarge Valley, while the campsites at Piper Pan can be accessed from either Matswere or Xade. New tracks and campsites have been opened up along the Passarge Valley, where game viewing can be most rewarding, and south from the Passarge waterhole area through to link up with the Piper Pan/Deception road.

It is along the latter route that the new Tau campsite has been opened in an area that truly reflects the very spirit of the Central Kalahari. There are plans to put in rustic pit latrines to service most of these undeveloped campsites, but until that’s done, visitors have to dig their own mini-latrine to ensure they leave no signs of being there, particularly where toilet paper is concerned.

Firewood may be collected from well-wooded areas but not from tree islands. The ashes from campfires must be buried before leaving campsites, combustible rubbish burnt and non-combustibles carried back to the pit at the entrance gate.

Undeveloped campsites are available for overnight stops at Molapo, Gope, Bape and Xaka.

Game viewing for animals including giraffe, brown hyaena, warthog, wild dog, cheetah, leopard, lion, blue wildebeest, eland, gemsbok, kudu, red hartebeest and springbok is best between December and April, when the animals tend to congregate in the pans and valleys. Sleeping in the open without a tent is dangerous and foolhardy so it’s best to keep tents fastened to keep snakes, scorpions, etc. out. Foodstuffs, etc. should not be kept in the tent but  rather be kept in the vehicles to avoid the unwanted attention from the lions and hyaenas. 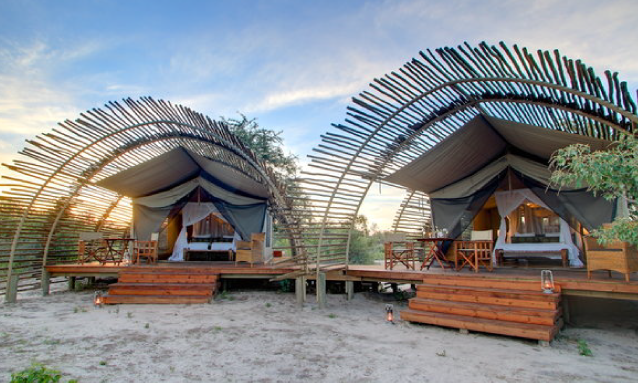 Both Kalahari Plains Camp and Tau Pan have been operating in the Central Kalahari for a number of years. Game viewing at both can be fantastic at the right time of year. There are also three camps outside of the reserve boundary that offer the Kalahari experience. The neighbouring Deception Valley Lodge, Dinaka and Haina Kalahari Lodge (pictured above) are becoming increasingly popular, as space at the camps inside the reserve is limited.

When staying inside the Reserve, you are restricted by national park rules, so both camps and the mobile safaris – base their activities around game drives during the daytime. In the private reserves on the Northern part of the Central Kalahari, activities are more flexible and night drives and walking safaris are allowed.