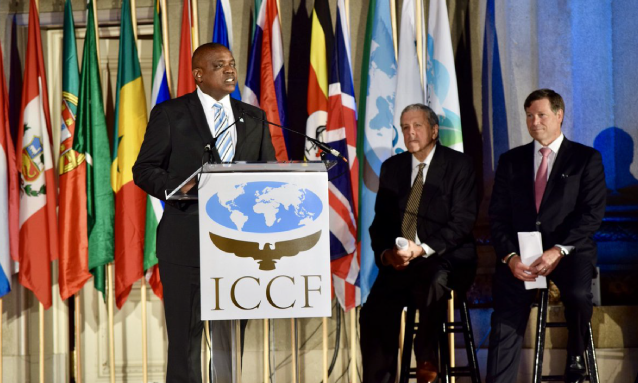 Botswana remains steadfast in its commitment to protect and safeguard the world’s natural heritage under its care, says President Mokgweetsi Masisi.

Giving a keynote address at the 2018 International Conservation Caucus Foundation (ICCF) gala dinner in Washington DC on September 25, the president said the country remains committed to the maintenance and nurturing of the conservation ethos for the benefit of its future generations and the global community. The President assured conservation enthusiasts who are passionate about the preservation of the world’s fauna and flora and its sustainable management that “Botswana remains a country that is truly one with nature”.

The President told delegates that approximately 42 per cent of Botswana’s land mass is designated as parks, resource and wildlife management areas, with the northern part of the country hosting four protected areas of diverse landscape and biodiversity.

“From the wetlands of the Okavango Delta to the beautiful vastness of the Makgadikgadi Pans, northern Botswana is home to the world’s most distinct natural ecosystem with abundant wildlife, including the big five”, Masisi said.

President Masisi said Botswana is one of the most sought after tourism destinations and puts a significant amount of energy towards conservation efforts in relation to its countless species of migratory birds. The president said the Wildlife Conservation and National Parks Act of 1992 promotes progressive and effective policies that have resulted in the conservation of vast wildlife and increasing community involvement.

“Botswana is home to several species that are globally threatened such as the cheetah and the wild dog,” he said, adding that efforts to save the white rhino from the brink of extinction have been successful, with the species having been reintroduced to the wild, where it is thriving.

The President said Botswana remains committed to implementing the Sustainable Development Goals, in particular, those linked to biodiversity conservation, combating poaching and the trafficking of protected species. President Masisi said Botswana’s elephant population remains key to the future survival of the species throughout much of its African range. However, he said the increasing expansion of the elephant range southwards and westwards from their core areas has resulted in increasing encroachment into areas of human occupation, which has led to the human/wildlife conflict.

“Efforts are underway to mitigate the situation by dedicating increasingly scarce resources to provide additional water points, as well as to actively drive elephants away from conflict with humans around their settlements,” the president said.

He said in accordance with the country’s democratic practice of transparency and consultation, a national elephant action plan is being developed with the active participation of all stakeholders.

President Masisi said tourism has emerged as a major contributor to the country’s economy and job creation for the youth, women and rural communities in general, stressing;

“It is critical that we redouble our efforts in diversifying the tourism product to ensure maximum benefit for investors and our people.”

The president assured conservationists that recent media reports alleging a sharp spike in elephant poaching in Botswana attributed to the withdrawal of weapons from the Department of Wildlife and National Parks’ Anti-poaching Unit were inaccurate. He explained that the disarmament of the unit was in relation to a particular category of weapons, which Botswana law prohibits members from carrying let alone using.

“In Botswana, we have been and remain committed to upholding the rule of law. Withdrawing certain weapons from the department was in accordance with the existing legislation,” he said.

Additionally, he highlighted that the action did not in any way affect the operational effectiveness of Botswana’s anti-poaching operators. Masisi also told delegates that the Botswana government would be conducting a public dialogue across the country to gather the views of citizens and various role players as far as the lifting the 2014 hunting ban is concerned.

For his part, ICCF President, John Gantt said the foundation is proud to support the conservation caucus model, which had extended to 13 countries globally, among them Botswana. He said caucus leaders gathered for the Global Legislative Conservation Summit where they all signed the historic Mount Vernon Declaration, pledging their commitment to conservation and to go back to their countries, where they would continue sustainable development efforts.