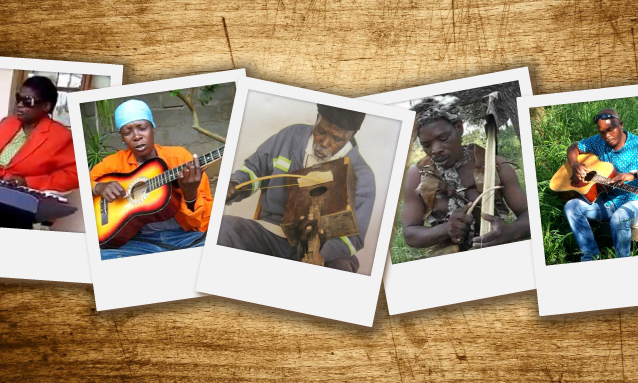 As YouTube videos go, a 2009 clip entitled “Botswana Music Guitar – Ronnie – ‘Happy New Year’ ” is not the most visually arresting — just a static shot of a man sitting in front of a cinderblock wall and cradling a battered acoustic guitar, while behind him a second person, in a blue work shirt and khaki pants, looks into the distance, bored.

Then Ronnie Moipolai begins to play. It’s a simple tune, with a loping rhythm and sunny chord progression that’s recognizably related to much of the folk music of sub-Saharan Africa.

But Moipolai’s technique on the instrument is strikingly distinctive, right hand strumming three strings in open tuning and plunking out bass on a fourth, down-tuned string. His left hand, meanwhile, dances across the fretboard, overhand, in a series of casually acrobatic moves, striking its strings with every part of his hand — fingers, knuckles, open palm.

Johannes Vollebregt, an ex-pat from the Netherlands, had seen several such guitarists playing at chabins, the outdoor speakeasies that dot the suburbs of Botswana’s capital, Gaborone, earning about 10 pula — about a dollar — in tips for each song. A guitarist himself, Vollebregt was fascinated by the creativity and intricacy of the style, which can also involve striking the fretboard with an elbow or occasionally even a foot.

“I really thought these guys deserved something more,” Vollebregt tells NPR by phone from his home in Gaborone. “I really wanted to do something for them.”

So he began inviting the musicians over to his house, where he’d give them some money and a few beers, film them playing in his driveway and upload the results, like Ronnie’s “Happy New Year,” to YouTube. Until a decade ago, when Vollebregt began uploading his videos, few had seen this style of guitar playing outside of Botswana, the landlocked country in southern Africa to which it appears to be unique.

Now, thanks in part to Vollebregt’s videos and the 7-million-plus views they’ve generated, a compilation, titled I’m Not Here to Hunt Rabbits and featuring the work of Moipolai and other Botswana musicians, is set for international release.

The record will be jointly released on Friday through the German label Piranha Records and Brooklyn’s The Vital Record, whose owner, David Aglow, was so entranced by these artists’ work — introduced to him via Vollebregt’s videos — that he travelled to Botswana to record them in 2014.

To do so, Aglow spent about two months in Gaborone, alongside Vollebregt and its surrounding villages, recording the eight musicians featured on the collection. The origin of Botswana’s overhand, four-stringed guitar technique is a mystery, even to the musicians themselves. Most say they learned it from an older relative or family friend. (Some also play in a more conventional underhand style, but usually cite some other, non-Botswana inspiration for doing so; Sibongile Kgaila, one of two electric guitarists featured on I’m Not Here to Hunt Rabbit, mentions Zimbabwe’s Leonard Dembo as an early influence.)

Though popular in the shebeens, the four-stringed guitar is not a sound widely heard on Botswana radio, which is dominated by pop music from neighbouring South Africa and Zimbabwe. Compared to neighbouring Zimbabwe and South Africa, Botswana’s music industry is minuscule. With only 2 million inhabitants in an area the size of France,

“There is no market here,” says Vollebregt. For traditional musicians, “it’s a real struggle” to get their music heard.

Aglow and Vollebregt wanted to document other styles of traditional Botswana folk music played on stringed instruments that pre-date the arrival of the guitar in Africa. So they also included two songs by Babsi Barolong, an 85-year-old retired diamond miner who plays a three-stringed violin-like instrument called the fenjoro, and another two by Oteng Piet, a former cattle herder who plays one of Botswana’s most ancient instruments; the segaba, a one-string, bowed instrument.

“It was played long ago by the Khoe San,” Piet explains by phone from Vollebregt’s house. “I learned it by seeing my uncles playing it.”

The Khoe-speaking San, now an ethnic minority in Botswana, are thought to be the region’s oldest culture; some continue to live in hunter-gatherer societies in Botswana’s most remote areas, although the government forced many off their lands to make way for diamond mines and cattle ranches. Piet is Tswana, Botswana’s dominant ethnic group, but says the segaba has been widely adopted among cattle farmers, many of whom are of San descent. In the album’s liner notes, he calls the segaba “the instrument of the remote cattle post.”

The melody of Piet’s “Ngwana Wa Dichabeng”(“Lonely Days”) is kindred to the guitar-rooted songs on Rabbits, but the eerie, keening wails of the segaba give it a more mournful patina. Piet’s version of the instrument includes one relatively modern modification: a metal can be attached to the top to act as a resonator.
Oteng Piet, playing his modified segaba.

Though the instruments and playing techniques heard on I’m Not Here to Hunt Rabbits are, for the most part, traditional, the subject matter of the songs themselves is often strikingly modern. One of Barolong’s fenjoro tunes sings the praises of condoms — an important subject in a country that has some of the highest HIV infection rates in the world. On “Cell Phone,” a guitarist called Western warns that the titular device makes cheating too easy: “It’s breaking up people’s marriages,” he sings. 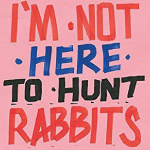 Prior to the release of I’m Not Here to Hunt Rabbits, Vollebregt’s uploads appear to have helped some of the musicians achieve a measure of success. In 2013, Piet, Barolong and Moipolai performed two weeks of shows in Cape Town at the behest of South African musician and playwright David Kramer, who had also seen the videos. Other musicians featured on Rabbits had already achieved a degree of national recognition; Solly Sebotso has toured internationally and won several national guitar contests, and the album’s lone keyboardist, Annafiki Ditau, wrote “Re Babedi,” the rare local hit on Botswana radio. Success is relative, however: Despite her renown, Ditau, who is blind, still makes most of her money playing outside a supermarket near Gaborone’s main bus terminal.

With I’m Not Here to Hunt Rabbits; Aglow hopes to build on the success of Vollebregt’s YouTube videos, some of which have over a million views.

“To me, this seemed to be a cultural event, a cultural music that I’d never seen anywhere else,” he says.

For the musicians themselves, the goals are more pragmatic.

“I am hoping that this record is going to give me a living,” says Piet, who also works as a cook at a primary school.

“I earn a living [but] it is not so much that I can do some of the things, like buy my kids clothes or something like that. It’s only a little money.”

The compilation I’m Not Here to Hunt Rabbits will be released on April 27 on The Vital Record.