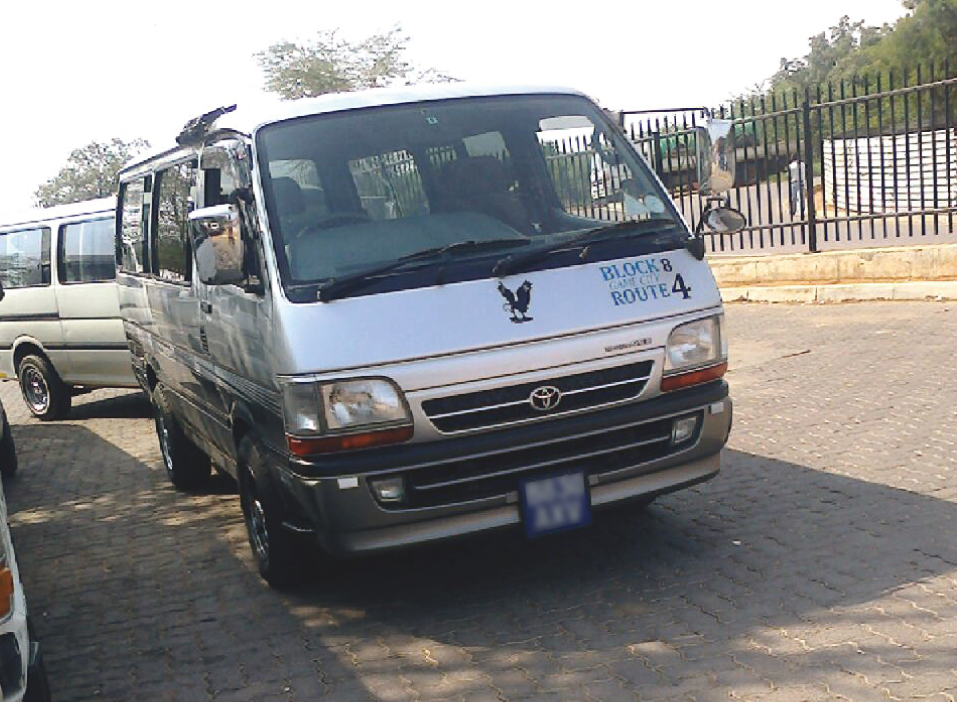 If you ever find yourself in Botswana, prepare yourself for the lack of reliable public transport. Well, that is public transport as some of you may know it, such as scheduled trains, trams and tube trains.

Botswana public transport is designed with the needs of the local populace in mind and generally sticks to the main roads between major population centres. I hate to say this, but although cheap, it’s not always reliable. If you are new to it, it can be very daunting, as it’s not very well coordinated or easy to understand if you’re not a local.

A Look at Different Means Of Public Transport

The most commonly and widely used form of public transport used is what we call “combis”. Combis are basically mini buses that function as buses, and easily recognizable by the display of different ‘routes’ at the front and blue registration plates. They are privately owned and run without a schedule. If you’re catching a combi from its departure point, usually the station or ‘bus rank’, it only leaves once full.

They navigate their way from a designated starting point, usually the station to a specific area of town. Along the way, they stop to let people alight or get on. There is no stop button, so you have to tell your driver to stop for you by shouting out any of the following as you’re approaching your stop:

The Verdict On Combis

Combis are all right to get around with, albeit extremely frustrating in many ways. For one, the drivers have the tendency to go at break neck speed, at times even racing each other as they jostle for position in the scramble for passengers! Worse still, they can get belligerent when put on the spot over their reckless driving. As a result, people don’t always complain.

*I must stress, this doesn’t apply to inner-city combis.

At Times Slower Than a Snail

On the flip side, combis can go at a snail’s pace; looking for passengers, going off the main road or reversing to pick up lazy passengers who cannot be bothered to power walk/ run or at least signal to indicate whether or not they are getting on. This is pointless, considering there is a combi available every time you blink. So I reckon people don’t see the need to rush for a combi when there’s a whole lot of them behind it.

If you are in a hurry to go somewhere, forget combis! They can test the patience of saints, especially on quiet days. They slow right down, scouting for passengers in every nook and cranny, every alley and passageway. The weird one is where they even try to convince someone going the opposite way to grab a ride! -Or when they flirt with the women in a bid to butter them up and hopefully coax them on, which wile comical can be very frustrating. Often they will park the combi at a stop or glide while they wait for it to fill up, never mind that there are already people waiting in the combi!

I must point put that this tends to happen along the Tlokweng route, with River Walk mall being the place of choice to stop and ‘round up’ more passengers. In the past we have even opted to get off to take a taxi instead.  We tend to do this when we have had to wait up to 15 minutes, squashed up against other passengers in the scorching heat.

If you’ve never experienced travelling by combi, it’s worth experiencing it at least once, but other than that the novelty soon wears off to be replaced by frustration and anger.

*I must stress, this doesn’t apply to inner-city combis.

At Riverwalk mall you’ll find a bunch of guys who spend the whole day running up and down rounding up passengers to take them to the relevant combis. The combi operators give them a small reward for their ‘service. Although they can be very animated and slightly scary, they are harmless. I call them ‘runners’ for lack of a better word. I think it’s worth being aware of them, in case you think they are out to rob you!

NB: The fee is P3.50- set by the Department of transport and is subject to change. Collected onboard the combi either by the driver or the ‘conductor’. There are no daily savers, weekly or monthly tickets to buy.

There’s an abundance of local buses that travel from Gaborone outward to various parts of Botswana, all privately owned. The buses depart from 5.30am from the ‘bus rank’ situated near Rail Park mall. There’s no schedule published, so you would have to go to the bus rank to enquire about departure times and prices. The bus rank is very heavily populated and can be very intimidating as it’s not very organized and heaving with people. There are incidents of crime such as bags being snatched, but on the whole, it’s safer than it actually looks.

*The bus fare is relatively low i.e the last time I travelled from Maun to Gaborone, it cost me P250. Check and confirm fares**

Tickets can only be bought onboard the bus, and not before. The longer the journey, the less comfortable the buses are. Sadly, the buses are not exactly built for comfort. They don’t have any reclining seats, not much legroom and have no toilets onboard. Although the Department of Transport doesn’t approve of it for health and safety reasons, cramming the buses full is not uncommon. Additionally, there are almost always many standing passengers, making it even more uncomfortable and hot especially in the summer months.

You are not able to buy any provision on the bus either. There’s usually a break about half way through the journey, where passengers are able to get off and stretch their legs, buy some food and water and use the bathroom. Some bus drivers play very loud music or play some ‘interesting’ movies’, which may not be to your taste.

There are also night buses, which I’m reliably told can be just as noisy. Travelling long distance by bus may not be the most pleasant of experiences, but the fact that it’s cheap may take the sting out of the discomfort. You could alternatively fly Air Botswana, but airfares are not very kind on the pocket, and delays commonplace; although there’s hope that this may change following the airliner’s partnership with Qatar Airways.

Combi- blue registration plates minibus
Route- as the word suggests, the route along which the combi goes
Station- the starting point for most combis
Bus Rank- where you’ll find outbound buses and some combis

As far as combis are concerned, if you need to be somewhere at a specific time, ensure you leave well in time. Or better still, grab a taxi.

If you don’t know where you’re going and feel overwhelmed, breathe and ask the driver to tell you when he gets to your stop. They are generally good with this sort of thing.

Try to break down your money into smaller denominations or better still, coins to avoid delays. I personally never give a combi driver or ‘conductor’ anything over P20. I carry around a lot of coins to avoid any problems.

Try not to stress out because combis are relatively safe and you aren’t likely to be short-changed.

If you’re getting the bus for a long journey, ensure you get to the bus ranks with at least 45 minutes to an hour to spare, so as to grab a seat. The seats fill up pretty fast.

Be sure to grab some provisions; especially plenty of water, wet wipes, some tissues, something to eat etc Even though the bus does stop for people to pick up stuff, the queues can be long and you don’t want to risk being left behind! You usually get about 10 minutes to grabs some stuff from a store and use the loo.

If you’re travelling alone, you might want to load up your MP3 player with some of your favourite music and take along some reading material, as there’s not much to see on a lot of the roads. You used to be able to spot some wild animals on the Francistown-Maun road, but not so much anymore and with good reason.

If you miss your bus, breathe and try not to panic because there’s usually another one scheduled to depart about 30 minutes to an hour later.