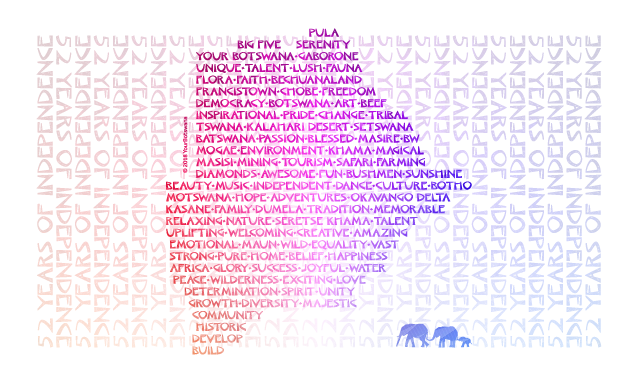 Today marks 52 years since Botswana gained its independence from Britain. To celebrate, we bring you 52 cool facts about Botswana you may not be aware of.

1. During the 1920’s, Bangwaketse pioneered the creation of a universal health service, two decades before the British NHS.

2. From 1966 to 1996 Botswana enjoyed the world’s highest economic growth rate. Under British rule, the country’s real income had declined.

4. Botswana is also on target to achieve its health-related MDGs of reducing child and maternal mortality and combating HIV/AIDS and malaria.

5. In the 1950s, through the efforts of Dr. Alfred Merriweather, Batswana became the first people in the world to be totally inoculated with penicillin.

7. Local Batswana, in communication with early European visitors, are credited with establishing the link between the Tsetse fly and African Animal Trypanosomosis.

8. Botswana’s eastern border with South Africa has not changed since the mid-19th century, originally being the eastern boundaries of the Bakwena, Bangwaketse and Bangwato kingdoms. The border also marks where the so-called “Great Trek” came to a halt after Batswana, led by Kgosi Sechele in 1852-53 became the first black Africans to defeat the Transvaal Boers by using firearms.

9. Bakwena regiments adopted modern conical bullets before the militaries of America, Britain and Russia among others.

10. In the mid-19th century, Botswana was a major exporter of ivory, ostrich feathers and other wildlife products.

11. Botswana is a global leader in wildlife protection and combating the illegal wildlife trade; 25% of the country is allocated to Game Parks and Reserves while another 20% is reserved for wildlife management areas. Botswana’s hospitality and tourism industry employs over 35,000 citizens.

12. The Okavango Delta is the 1000th UNESCO World Heritage Site.

13. So much ivory once came out of the Okavango that it was believed to be the location of a mythical “elephants graveyard”.

14. Today Botswana is the home of the world’s largest elephant population, estimated to number between 150-200,000.

15. Rudyard Kipling’s popular children’s story about how the elephant got its trunk is set in “Khama’s Country”.

17. Over the last three decades, Botswana has been the world’s leading producer of gem diamonds by value.

18. DeBeers diamonds from around the world are aggregated and sold in Gaborone.

19. Botswana has previously loaned money (with interest) to the World Bank.

20. Botswana ranks above most European countries in its percentage of females serving in senior positions in the public and private sectors, while also being among the countries where females are in the majority in professional and technical employment.

21. Botswana has one of the highest per capita incomes of any landlocked country outside of Europe.

22. In 1933, Botswana became the only landlocked country ever invaded by the British navy when Admiral Evans led sailors and marines to Serowe to depose Kgosi Tshekedi Khama.

23. A 1934 film production based on Evan’s expedition, titled “Black Land” was banned by the British Board of Censors.

24. The earliest known filmmaker in Botswana was Rudolf Pöch, an Austrian who from 1907-09 filmed local Khoe (Basarwa).

25. The exiled wing of the ANC, along with the MK, was launched in Lobatse in November 1962.

26. The Oscar-winning film “Guess Who’s Coming to Dinner” was inspired by the controversy surrounding the marriage of Seretse and Ruth Khama. It starred the Khama’s sometime London guest, Sidney Poitier.

27. Sidney Poitier also starred in the 1975 anti-apartheid action thriller “The Wilby Conspiracy”, which climaxes in Botswana with local villagers stopping Apartheid agents from arresting the leader of the “Black Congress”.

28. The movie “A United Kingdom” depicts the persecution of Seretse and Ruth Khama, directed by Amma Asante and starring David Oyelowo and Rosamund Pike. The screenplay is by Guy Hibbert, based on the book “Colour Bar” by Susan Williams.

29. As “British protected persons” before 1966, Batswana such as Seretse Khama could be detained or banished indefinitely without legal recourse.

30. Botswana’s first ambassador to the United Nations, Z.K. Matthews, is known as the father of the Freedom Charter.

31. “Fatshe la Rona” (Botswana’s national anthem) composer K.T. Motsete was the first local Motswana to be awarded an overseas tertiary education scholarship; he studied theology and music in London in the 1920s. K.T. Motsete did a lot more than pen Botswana’s anthem! He helped found of the Nyasaland (Malawi) African Congress (1944), as well as the Serowe based Progressive Party (1931), the Bamangwato National Congress (1952), the Bechuanaland Protectorate Federal Party (1958), and the Bechuanaland People’s Party (1960).

35. The first public radio service in Botswana began broadcasting in 1936; it started a Setswana news service during the Second World War.

36. Just over 10,000 Batswana enlisted in the African Pioneer Corps during World War II, while at least 3,500 Batswana fought in World War I.

37. From 1914 to 1930 the Caprivi Strip was administered as part of the Bechuanaland Protectorate.

38. Bangwato gunners helped save the US 5th Army in the 1943 Battle of Salerno.

39. Camels came to Botswana in March 1908 when a German camel corps of some 600 men invaded the Kgalagadi District in pursuit of the Nama leader Simon Cooper.

41. Hawaii is opposite Botswana on the globe. In 1966 the then Governor of Hawaii represented the USA at Botswana’s independence.

42. Dikgosi Bathoen I, Khama III and Sebele I visited Britain in September–November 1895, over a decade after the 1885 British proclamation of their Protectorate.

43. Charles Warren, the British General who in 1885 formally informed Batswana of the British Protectorate, went on to become London’s Police Chief, now remembered for failing to apprehend “Jack the Ripper’.

45. Botswana is the 48th largest country in the world, around the same size as Madagascar or France.

46. With a population of just over 2 million people, Botswana is the third most sparsely populated country in Africa.

47. In 1975, Liz Taylor and Richard Burton got married (for the second time) at Botswana’s Chobe Game Lodge.

48. The border between Botswana and Zambia is one of the shortest in the world, covering just 700m.

49. The Makgadikgadi Pans are the largest saltpans in the world, stretching over 12,000 sq km.

52. The Botswana government has formed a unique partnership with local tourism operators to set up an initiative called the Botswana Rhino Relocation and Reintroduction. The programme is aimed at reintroducing rhino to strategic areas in a bid to save the species from extinction.

We hope you enjoyed learning a little bit more about Botswana. Have a lovely Independence break and stay safe! Pula!