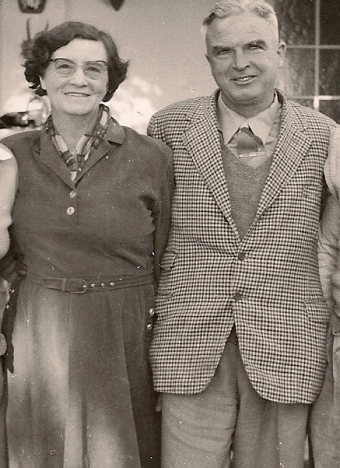 For Ernest Midgley to be sent to Ghanzi to be District Commissioner in 1950 was with mixed feelings. This was a mixture of him having ‘command of his own ship’ (I quote from him), and being sent to Siberia, as a “punishment post” (why punishment, I wonder. Perhaps he had a chip on his shoulder that he was so different from the other DCs: a Quaker, a non-drinker, a stickler and pedant…)

The following is an account of some of his administrative challenges. This account he relates his efforts, duties and as stumbling blocks. He figured that the district needed WATER, ROADS and SCHOOLS, and there was no money.

Like the Romans, I decided that priority should be given to communications which would make it cheaper to provide water and education. I had been given £15 for roads. Indeed, all districts were allotted so little money for roads that it was seldom used. And it was reverted to the Treasury!

In January, 1951 I figured that I had £30 with the £15 available in March for the year 1951-1952. So I started to cut a straight road from Kalkfontein to Sandfontein by- passing Olifants’ Kloof. Tools I bought out of gaol funds and when the money gave out, I used prison labour. The prisoners loved it as they could supplement their diet by traps and veld food. There were no escapes as prisoners could be found easily in a waterless sparsely populated area.

These roads are now on all maps of Botswana.

Jack Chase, the Administrative Dairy Officer visited Ghanzi. He said that they had money in the Dairy Levy Fund and did not to know what to do with it. I said Ghanzi needed a cream road to Gobabis. Jack said I can let you have £300! This was overwhelming!

I had a road built that cut across the corner of South West Africa, and back through the BP  after much displeasure from the authorities. When the new road reached the SWA border I visited the South African Police at Buitepos and found a posse of road machinery there.

“Whatsup?”
“We have to cut a road along the border to Rietfontein”.

There were graves at Rietfontein of Dorsland Tekkers and people were to come from all over SA for a memorial gathering. I asked if they could not use my road and cut the corner.

“We can’t do that without the authority from Windhoek”.

So I went straight to Windhoek and saw a Mr Neser the Secretary. Now this was highly irregular, for not only was I leaving my district without authority and entering a foreign country, but also short-circuiting diplomatic channels. Mr Neser was enamoured with the idea but could do nothing without authority from the SA Minister of the Interior, Dr Malan, the Prime Minister.

So I returned to Ghanzi and got on the blower to Mafeking. Head Office was horrified and at first declined. I pleaded that the road machinery was on the border ready to do the job and there was the Agreement for South Africa and Bechuanaland Protectorate to co-operate. (SA was still trying to get the High Commission territories under their wing as provided the Act of Union, 1910.) A week later, I was told to go and see Mr Neser in Windhoek. Mr Neser sent me to the PWD who said they would do whatever was required as instructed by Dr Malan!

I now had to rush the road through Karakobis to the SWA border and within 2 weeks the road had been graded to Rietfontein. There I asked if the section to Ghanzi border could not be graded.

So I had it done in an hour or two! I had no authority for this expenditure and was prepared to pay out of my own pocket. I knew that if I passed the hat around at Ghanzi, I could easily raise the money from local wealthy farmers. It was this sort of thing that had me labelled as one who did things and asked for authority afterwards. The treasury was often displeased! Like when I added tobacco and condensed milk to the road gang’s rations- and their pay being 1/- a day.

Now came the need for WATER. Ghanzi farms had shallow wells in the limestone belt and a dry borehole had been sunk to 300ft close to SWA border near Olifantskloof. The road from Buitepos border to Makunda went through heavy fine white sand close to sip wells (Mamuno is Sesarwa for Sip Wells), so I cut a new road on a higher ground to Makunda – at the junctions Charlie Sharp built a shop called Charleshill.

I held a meeting with the Herero at Makunda and they asked for a boring machine. I told them that the Government. machines were all along the railway line and it was not feasible to bring one across the Kalahari.  How much would it cost to get a SWA machine? I said “perhaps £300” and forgot about it.

Some months later I visited the tribe and a leather bag was put on the table and it contained £300! The Herero put me on the spot! And so a borehole was sunk at Makunda and at Mamuno for a new police post. The Bakgalagadi at Kule provided oxen and the machine sunk a 600ft borehole at Kule in the Karoo system, a belt which runs across the desert as far as Artesia on the main line. When I left Ghanzi in 1956, scores of boreholes had been sunk. 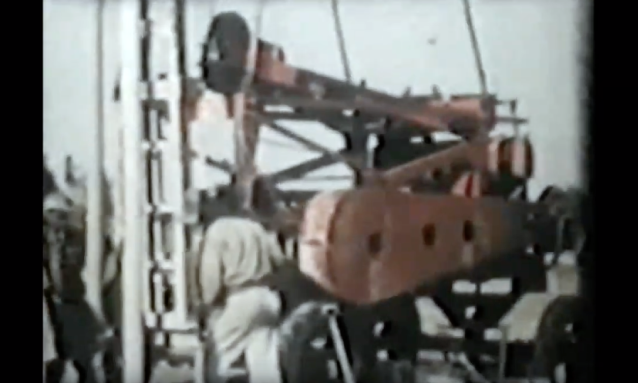 The principle was that the tribe had to provide the school (on the £ for £ principle), and Government the teaching staff.

This was Crown Land and I was given £300 for a school at Kalkfontein – the biggest tribal centre. There were no trees suitable for roofing, nor grass for thatching. So I ordered a truck-load of poles from Stutterheim, and corrugated iron and doors and windows and built three schools; one at Kalkfontein, another at Karakobis, the other at Nojane. The school at Kalkfontein was made of “pisé de terre” with the walls 14” thick. At Karakobis, I found a tribal brick maker who burnt bricks. At Nojane we used Kimberley Bricks.

At Ghanzi, Mr Weyhe was conducting a school at Dakar under deplorable conditions – teenage boys and girls were sleeping in the same room. I got the doctor at Maun to report and also the Dominee (Preacher) at Gobabis (it was no good for MIDGLEY to report!). The Government agreed to build a school on the £ for £ principle. Tinkie Craill said he would make the bricks for £1 per thousand. I said no, you must charge £2 per thousand, and donate £1 to the school fund. In this way of high finance, the bricks cost nothing!

I did not tell the Government about this! Craill headed the list of donations, putting two other wealthy farmers, Burton and Lewis on their nettle! Others donated cattle and goats, which in the end provided milk and meat for the school.  In the end, we had automatic [sic] electric lights and were able to have fortnightly ‘flicks’. Chris Lewis put down a borehole. Bishop Paget visited from Bulawayo and said he would tell the Queen Mother what we were doing, and we did indeed receive a letter from the Queen.

In 1954, I was to be transferred. I had by this time cut a road from Ghanzi to the borehole at Takaswane and was starting to cut a road to Kang where there was an Indian shop and I knew there was less sandy veld. I also knew that nobody else would continue with this work. So I got Eaton the surveyor to write and ask Head Office for me to return to Ghanzi, as he needed me to advise him about the farm survey. An unheard of thing happened, all DC’s were instructed to transfer unused road funds to DC Ghanzi- my popularity was at a low ebb!

The Police in Mafeking (Geoff Taylor) provided me with a prismatic compass and a field transmitter and I cut the road to Kang.  Cecil Rhodes flew to his farm from Mafeking and he kept me on course, and at times dropped supplies. Every morning at 7 am I contacted Opperman by radio and when necessary I took, food and water by truck to the road party. When it rained (very rarely) they filled up water with a tarpaulin.

Opperman was a refugee from Northern Rhodesia who had been a ganger on Rhodesian Railways.  The PWD (Public Works Department) gave me a grader that I had to pick up at Gaberones.  McCarthy fetched the grader and pulled it across the Kalahari and graded the road from Kang to Ghanzi for free!

Today I am told one can drive from Ghanzi to Lobatsi in 8 hours, instead of 5 days! I saw in a Southern Africa Directory that there is a Bank at Kang and telephones at Ghanzi. I marvel!