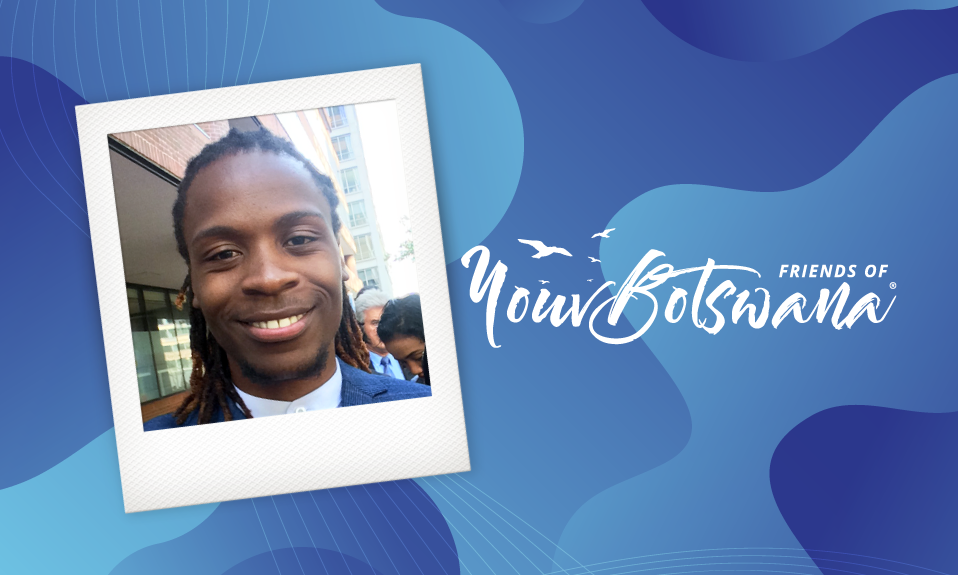 Dumelang, my name is Ephraim Modise. I’m a 24-year old Motswana and here’s my profile.

My middle nameis Kabo, which means “gift” in Setswana. I guess my parents gave it to me because they considered me a gift to them from the Creator.

I’m a blogger, podcaster and entrepreneur. I have been blogging for about a year and a half, podcasting for about half a year and been involved in entrepreneurship for a little over 2 years. I enjoy blogging a lot because writing has always been a passion of mine since primary school when we would write English compositions.

I’m the proud owner of a blog site – someblackguythoughts.com and my podcast “Some Black Guy Thoughts: The Podcast” is on all podcast platforms including  Apple Podcasts, Spotify and Stitcher.

So, through blogging, I get to do something that I really enjoy doing. As for podcasting, I have had a stutter since childhood. So, getting into that was a real leap of faith and it helps me work on my speech as well as sharing information with my fellow Batswana.

Lastly, I enjoy being an entrepreneur because every day it boosts my tenacity to not give up on my dreams. I also like the fact that it affords me the dignity to choose my destiny and do what I love.

I would describe myself as a passionate young man who enjoys reading and writing as well as a wide variety of music. Although I do not enjoy going out a lot, I wouldn’t say I’m an introvert because I do enjoy the occasional day or night out with friends. Depending on who you ask, I think some people would describe me as loud and jolly, especially close friends; while others would probably describe me more as reserved.

As far as hobbies are concerned, I enjoy reading and writing as well as playing table tennis. But unfortunately, I have not played table tennis since senior high school. I also enjoy skating but have not been on a board since I first started my university studies.

People will be surprised to know that I get asked, “how long have you had your dreadlocks for?” a lot. So, to answer, the locks have been a part of me, both literally and metaphorically, for a little over 7 years now.

I would say my greatest achievement so far was winning the 2019 World Bank #Blog4Dev award and travelling to Washington DC to represent Botswana at the World Bank/IMF Spring meetings.

Aspirations for the future…

Professionally, I would like to see my writing reaching a much bigger audience. So, getting the chance to write for international publications like The New York Times, The Economist, Washington Post, Al Jazeera etc is something I would like to achieve.

On a personal level, I would like to continue being the type of mindful and free-spirited person that I currently am.

I come from Tobane, a small village located just outside Selibe Phikwe, one of the country’s towns  made famous by the now-defunct BCL coal mine. I currently live in Francistown, Botswana’s second city in the northern part of the country.

Tobane is a small village where everyone knows each other or are related in some way, which makes it very communal and welcoming. The festive holiday break in Tobane is always interesting because most relatives come to visit from various towns, which creates a vibrant and festive feel. This is far cry from the dusty, small village it is through the year when everyone is away with work when it becomes sleepy.

By comparison, Francistown is busy and vibrant throughout the year except during the Christmas break when everyone  goes to their respective home villages for the holidays. In Francistown, I  live in a neighbourhood called “Monarch”, which despite not being as regal as its name might suggest, is a place I really enjoyed growing up in and still enjoy despite its problems with poverty and crime. In fact, living in the Monarch area gives me more courage and determination to achieve a better life for myself and my family. Moreover, it motivates the kids around the “hood” to not be the victims of the often dire circumstances they find themselves growing up in, to aspire to be better citizens.

My memories of growing up in Botswana…

My early years  were really good fun and were spent playing outdoor games with my cousins and friends. There were many games we played but the one we played a lot was called “2 pale”. It was basically football but with bricks for goalposts, because we did not have proper football facilities, so we had to improvise.

The other one game I really enjoyed playing as a child was what is known locally as “blackie”,  but it is really hide-and-seek. Last and not least was a game called “dithini” which translates to “tins” in English. The idea behind the game was to build a stack of tins and then topple it while avoiding getting hit by the ball being thrown by two opposing team members on either side of the field.

Apart from playing games, I also did the occasional small bird hunting using a slingshot, an activity I was very poor at because I only ever managed to kill less than five birds, I think.

Do you think Botswana has changed and how? Is it for the better or worse?

I am to not sure “changed” would be the word I would use. In my opinion, some of the things we see have always been there, but the only difference is that we were just not exposed to them. For example, before I moved from Francistown to Gaborone for my tertiary education, I did not believe there was drug abuse in Botswana. Simply because where I’m from, drug abuse is not something we are accustomed to.

But the “change” is not always bad because nowadays you also see Batswana, especially the youth, doing big things on the international stage. This inspires me to want to also work hard to get to that level.

In summary,  I would say although the “change” in lifestyle is sometimes hard to accept and get used to, it is inevitable because our people are bound to be influenced by worldwide trends. All we can do to curb the detrimental effects that come with it is educate our people about how not to fall victim to the vices that come with globalisation.

Is there anyone who has inspired you? Why?

I get my inspiration from a whole lot of places because it is my belief that literally anything or anyone can be an inspiration for you to be better. With that said, I would say the books which have inspired me the most, to name a few, are:

People wise, I would say I have been inspired by the life stories of the likes of Thomas Sankara, Nelson Mandela, Jeff Bezos, Steve Jobs, Oliver Tambo, Sir Seretse Khama, etc. I would say my parents and my grandmother have also been an inspiration for me to work hard in life and try to achieve whatever I set out to do.

What do you think makes Botswana such a wonderful country?

I think the peace, to start with, is a wonderful thing about living in Botswana because when you compare us to most of our African peers, you start to realise how much of a privilege it is to live in such a conflict-free country. The people are also very nice here, sometimes going out of their way to make you feel welcome and not like a stranger in places and situations you might not be very familiar with.

Our traditional food is also mouth-watering, with my favourites being seswaa (pounded meat), madila (sour milk) as well as delele (a variation of what is known as okra leaves in West Africa).

Are there any cultural aspects you do or don’t like?

What I do not like is the tendency for Batswana to be ignorant and not really care much about what is happening in the country, current affairs wise. Sometimes important issues only trend for a few days on social media, then after that everyone forgets and moves on.

I also dislike the tendency of staring at people, especially those with some form of disability or deformity because it can make them feel self-conscious and give them a complex.

Where in Botswana have you been and liked? Where would you like to visit next?

I have visited numerous places including Ramotswa which is a large, beautiful village near Lobatse close to the South African border. I have also visited the beautiful Makgadikgadi Pans which recent studies have found is the birthplace of modern humans.

Places I would like to visit include our tourism hubs Kasane and Maun as well as the Domboshaba Ruins –  all in the northern parts of the country.

Beyond Botswana, I would like to visit a lot of African countries including Rwanda, Ghana, Ivory Coast, Tanzania and Ethiopia because I believe strongly in pan-Africanism and would like to learn more about the life and culture of fellow Africans.

Do you feel there’s anything that needs to change or improve in Botswana?

Governance is one factor that has to improve in Botswana because it has the power to make or break a country. Over the last few years, there have been too many cases of corruption and other forms of bad governance and I believe for the country to move forward, the systems which allow such cases to persist have to be addressed and fixed.

How did you discover YourBotswana? What was your first impression of the website?

I discovered it whilst making a Google search and was impressed by the layout, content as well as the motivation and inspiration behind its formation. I believe YourBotswana is a very unique and effective way of knowing more about Botswana, its people as well as those who have visited or stayed in the country before.

What motivated you to become a Friend of YourBotswana and submit your profile?

Apart from having access to an international audience for my writing and podcasting work, I was also motivated by what the website is about and wanted to contribute to its content.

Is there anything else you’d like to see on YourBotswana that isn’t already covered?

I would like to see a special section dedicated to local creators because I believe there is so much talent in the country, and YourBotswana could act as the platform through which to expose this talent to an international audience.

Is there anything else you’d like to tell us about you or Botswana?

A fun fact about Botswana: Did you know that the border between Botswana and Zambia is only 150 meters long and is the shortest border in the world?

Thanks for reading my profile!