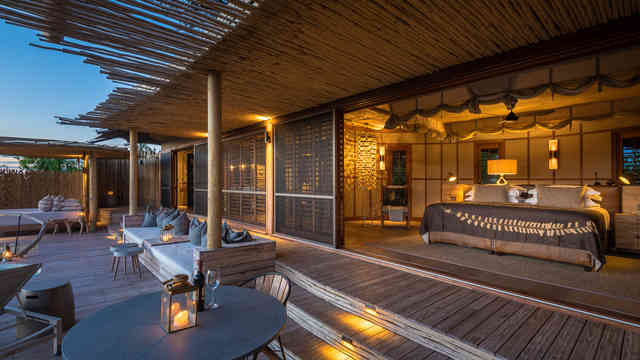 Over the years, Botswana has carved out a reputation as the luxury safari destination of choice. It is therefore not surprising that year after year, the country’s renowned tour operators continue to rack up accolade after accolade. What we will say here at YourBotswana, is that it just never gets tired.

Wilderness Safaris has done it again! The luxury safari giant has scooped more awards and been ranked as one of Condé Nast Traveler’s “Top 15 Travel Specialists” in the 2019 Readers’ Choice Awards. Wilderness Safaris was also recognised for the following:

Rebuilt in 2018, the company states on its website that Little Mombo is ‘a celebration of our conservation purpose, including the Botswana Rhino Reintroduction Project that takes place here.’ It combines luxury and service excellence with a celebration of the amazing natural splendour that is the Mombo wildlife area.

With just three tents tucked away on the other side of the same island, Little Mombo is a smaller, more intimate version of its sister camp. Built under a shady canopy of jackalberry and sausage trees, overlooking a floodplain regularly visited by herds of herbivores (and their predators), the camp has its own facilities, including a dining area, boma, kitchen, lounge and pool, while being connected to Mombo via a raised boardwalk.

Renowned as “the Place of Plenty,” the enormous number and variety of wildlife around Little Mombo makes it a hugely sought-after wildlife-viewing destination.

Game drives reveal the rich wildlife of the area from predators to prey. The Mombo concession is a bountiful hunting ground for leopard and large prides of lion.

Mombo’s isolation and sheer diversity of habitats make the area ideal for sensitive reintroduction projects and for the greater purpose of wildlife conservation.

A Wilderness Wildlife Trust-funded project developed a comprehensive understanding of the past and present genetic structure of the lion population centred on Botswana’s Okavango Delta.

The Mombo wildlife area is known as the “Place of Plenty”, highlighted by the massive concentrations of plains game and predators that live here. These include all the big cats, of which lion sightings are frequent. Leopard, spotted hyaena, large herds of buffalo, elephant, giraffe, blue wildebeest, Burchell’s zebra and more abound, while cheetah and wild dog are being seen more regularly in the area. It is here that black and white rhino were first reintroduced into the Delta, to be seen occasionally by a lucky few.

Gym and pamper sessions on offer

For those looking to exercise, there is a gym where you can work up a sweat whilst enjoying a view-filled, more often than not, with wildlife. What’s more, guests are able to enjoy the rejuvenating indulgence of massage treatment at the spa.

Long known as “the Place of Plenty,” Mombo boasts enormous concentrations of plains game and predators and is considered to be one of the best areas for game viewing in Africa.

Rebuilt in 2018, Mombo aims to maintain the traditions and history of the camp, as well as to celebrate our Conservation Purpose – indeed, one of our greatest conservation successes: the reintroduction of black and white rhino into the wilds of Botswana.

The nine spacious tents afford sweeping views over a floodplain teeming with wildlife. The sitting room, separate bedroom and bathroom, indoor and outdoor showers and bathtub with copper and brass fittings all contribute to Wilderness Safaris’ ideal of responsible luxury.

What you could see at Mombo

The Mombo wildlife area is known as “the Place of Plenty,” highlighted by the massive concentrations of plains game and predators that live here. These include all the big cats, of which lion sightings are frequent. Leopard, spotted hyaena, large herds of buffalo, elephant, giraffe, blue wildebeest, Burchell’s zebra and more abound, while cheetah and wild dog sometimes move through the area. It is here that black and white rhino were first reintroduced into the Delta, to be seen occasionally by a lucky few.

This is the conservation contribution to Botswana of which Wilderness Safaris is most proud. This ongoing project began as a joint initiative between Wilderness Safaris and the Botswana government in 2001. Since then, core breeding herds of both white and black rhino have been returned to the wilds of Botswana;  with the Rhino Monitoring Team is based at Mombo.

In keeping with Wilderness’ objective of reducing energy consumption and fuel use at all its camps, this camp is 100% solar-powered, with electricity and hot water provided via solar panels and inverters. Wastewater (sewage and grey water) is treated in an Above Ground Sewage Plant, ensuring that the water is clean before being allowed to enter the natural environment. In order to reduce use of bottled water, reverse osmosis filtration is done on-site to provide guests with high-quality drinking water. Like all Wilderness camps, this is managed and monitored against very strict in-house environmental standards, so only approved eco-friendly detergents and chemicals are used.