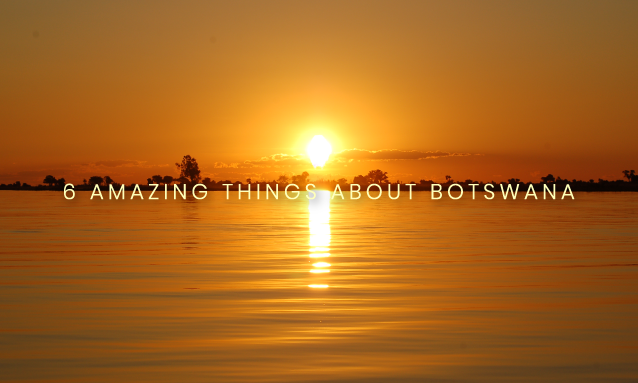 But the real magic of this tiny southern African country lies in the stories relatively untold. The remarkable people, places and phenomena. And of those, there are plenty.

Looking to escape the madding crowd, but unwilling to forego creature comforts? (And for ‘creature’ read ‘luxury worthy of royalty’.) A safari in Botswana is an unbeatable choice – luxury tented camps, five-star lodges, exquisite local cuisine, one-on-one customer service, all in remote locations where privacy comes guaranteed… Whether you choose to follow in Prince Harry’s footsteps and make the Natural Selections group’s tented camp Meno A Kwena your base, or step up the luxury even more at Mombo Camp – located in one of the most isolated and wildlife-rich regions in Africa and internationally renowned as the finest safari camp in the world, you will not be disappointed.

Botswana enjoys an abundance of wildlife, and this is by no accident; compared to most other countries, Botswana has one of the higher ranks in terms of how much area is devoted to national parks, reserves, and wildlife management areas. In fact, 45% of the country has been put aside for protection, and that has had a significant effect on wildlife populations.

One result of Botswana’s efforts to protect the environment is that they have the greatest population of elephants on earth. Elephants have suffered greatly over the years, with poachers threatening to drive them to extinction. Botswana’s conservation policies and efforts have managed to keep populations stable, with the largest concentration being found in Chobe National Park. In fact, Chobe National Park is also home to one of the healthiest big cat populations in Africa, with lions, leopards and cheetahs just lying around waiting to be discovered by you. (Well, not quite – they’re far more likely to be lying in wait of prey for dinner, but you are unlikely to be on the menu given your prime viewing position from a private game drive vehicle, sipping gin and tonics.)

Deemed one of the world’s premier wilderness areas, The Okavango Delta was the 1,000th place to be enlisted as a UNESCO World Heritage Site. It has also been voted one of the

Seven Natural Wonders of Africa. The Delta spreads across 15,000 square kilometres and is the largest inland delta in the world. It provides vital habitat to the black rhino, spotted hyena, Nile crocodile, and the lesser-spotted privacy-seeking, luxury-minded safari-goer. A wide variety of activities are available to guests, including guided game drives, bush walks, canoeing adventures and specialised boat trips along the Delta. In short, the Delta provides some of Africa’s most luxurious safari options.

5. The Louvre of the Desert

The Okavango is not the only Botswana recipient of World Heritage status. It has also been given to Tsodilo Hills, believed to be the site of first Creation by the Bushmen who painted more than 3500 rock paintings against the magnificent stone faces of the hills. Known as ‘the Louvre of the desert’, Tsodilo is home to one of the highest concentrations of rock art in the world, with some of the paintings dating back to around 800 to 1300 AD.

It’s not only the wildlife that roams free in Botswana. According to Freedom House – an organization that conducts research and advocacy on democracy, political freedom, and human rights – Botswana is one of only eight countries in Africa that can be described as truly free. A fact which makes those famed African sunsets all the more beautiful.

It is little wonder that Botswana has been repeatedly nominated by Lonely Planet as a top travel destination. Breathtaking sights? Check. Five-star accommodations? Check. Off the beaten track and not overrun by tourists? Check and check. Privacy, exclusivity, luxury? Check, check, check. Experience the magic for yourself and add a checkmark next to Botswana on your bucket list.