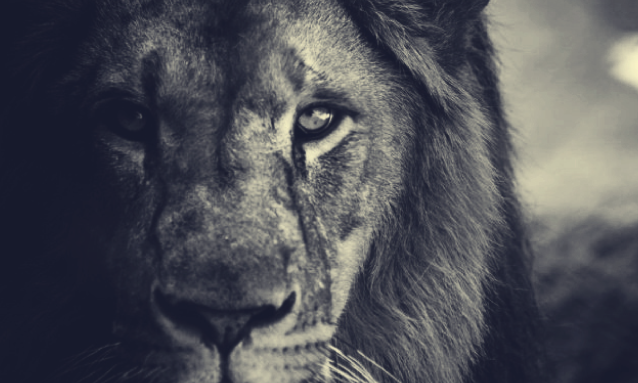 On Wednesday 7th November 1956 I was travelling in a 3-ton Lorry belonging to Mr Cecil Craill from Ghanzi to Mafeking accompanied by his wife, two Africans and by my personal servant, Boykie.

We were within seven miles of Kang village when we were stopped by three Kalahari Africans, who were mounted on horses and carried firearms. On enquiring what they wanted, we were informed that a lion had killed a bushman and that he was lying off the road nearby. They also informed us that there were ten lions.

We told the Kalahari to lead the way and followed them across country for two miles, when we came to a spot where a Bushman was lying under a tree wrapped in an old sail cloth and surrounded by twelve mounted Kalahari carrying guns. I approached the bushman and saw that he was alive. I took a coloured movie and snaps of him.

I noticed that he had a 3” deep gash across the side of his head above the ear and that his one shoulder was crushed with the teeth marks of the lion. I opened the sailcloth and turned him gently over on to his stomach and found that the right side buttock was completely torn away and a horizontal deep gash about 5” long across the small of the back exposing the spine. The flesh had already gone green and the stench was nauseating.

The poor Bushman only asked for water and this I gave to him in small quantities. He apparently was not suffering from shock and as the Kalahari had removed him from the place where he had been attacked, I was unable to ascertain the loss of blood, which, however, must have been considerable. Mr Craill and his wife sat in the lorry as they could not face the wounds. The Kalahari all turned away and then I proceeded to do the best I could.

I washed the wound thoroughly with strong permanganate of potash and after allowing it to dry, rubbed the contents of two tubes of penicillin ointment into the wounds. I then took one of my blankets and after saturating it with pure Dettol. I wrapped it around the Bushman, tying it up to prevent further dirt getting into the wounds. I loaded the Bushman on to Mr Craill’s lorry and requested him to travel day and night to reach Bray hospital – a distance of over 162 miles at an average speed of 6 miles an hour.

I instructed my boy to watch and care for the Bushman at the back of the lorry and we proceeded. As we neared Kang, I met a police fan with Sub-Inspector Ogden who was from Gaborones on census duties. I told him the story and we transferred the Bushman on to his lorry. He informed me that he would attempt to push on day and night to Molepolole hospital. I gave Sub Inspector Ogden the only tube of penicillin I had left and again smeared the wounds with the ointment before he left. I also gave the bushman 3 M & B tablets – all I had. I asked the Kalahari the story and this is what I was informed.

A lion had killed a horse on the Monday night at Kang. On Tuesday, morning twelve of the men mounted on horses and armed with guns followed the lion’s track and found that there were ten lions. The lions, knowing that they were being chased, found the spoor of the Bushman who was out hunting alone and mauled him. The Kalahari found him lying in the bush.

I would like to state that this statement is, in my opinion untrue, for no Bushman will hunt alone and can be taken unawares by lions. My idea is that the Kalahari went after the lion after he had killed a horse and instructed the Bushman, who lives at Kang to track the lion on foot while they were all mounted. Whether the lion was driven to desperation or wounded I do not know, but he apparently charged and the Kalahari galloped away. The Bushman, on foot, was caught by the lion. The Kalahari returned to Kang the next day to ascertain what had happened and found the bushman still alive. On hearing a lorry approaching, they decided to inform us of the tragedy. 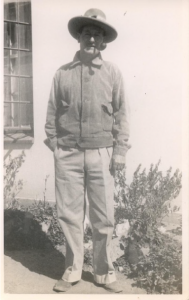 Richard Upton, (also known as Uppie) came to Ghanzi around 1952 from having been Agricultural Officer on the remote island of Tristan da Cuhna, in the S.Atlantic Ocean.

He was a well-known character in Ghanzi and was a close friend of Ernest and Olga Midgley.  For a time, he was manager of the farm owned by Cecil John Rhodes (a descendant of the famous CJ Rhodes) near Ghanzi.

Story and words by Fay Pearson

My father’s best station was in Ghanzi from 1950-1957 during which time I was aged 7-14. My older brother (Alan) and I went to boarding school in the Cape and Eastern Cape. During our time in Ghanzi, our unaccompanied journeys to school twice a year took us six days each.

I trained as a general nurse at Groote Schuur, Cape Town and I went to the UK to train as a midwife. I met my husband (George) in the UK when he was an Officer in the Royal Navy. We were married in Cape Town in 1967.

George and I now live in Portsmouth (UK) where I actively recount my many vivid memories of the by-gone days of Bechuanaland. I am passionate about my amazing childhood in Bechuanaland Protectorate and really hungry to share my stories.