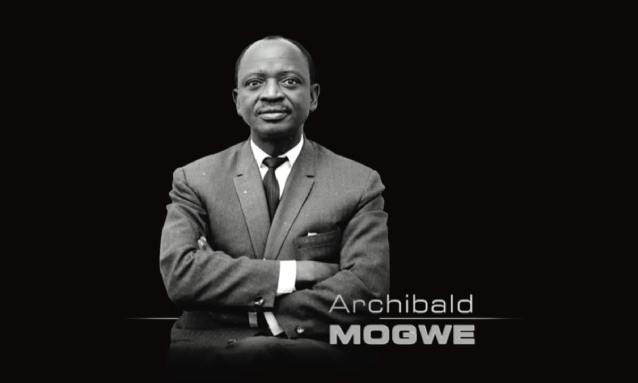 He was one of Botswana’s most erudite civil servants. A modest son of Botswana whose sharp mind saw him rise from the humblest of beginnings to an enigmatic diplomat who would not only shape Botswana’s foreign policy but also play a key role in the development of the country and the region as a whole. This stalwart individual is none other than Mr Archibald Mogwe who not only witnessed what happened to Botswana during her formative years but also selflessly participated in her growth both locally and internationally.

In every country, there are individuals who emerge with the power, the will, the intellectual prowess and the impetus to change their nations for the betterment of the welfare of their fellow citizens. Botswana has Archibald Mogwe, whose contribution to the development of the country is legendary and second to none. It is, therefore, fitting to tell the story of this iconic figure for posterity. His account of the history of Botswana is moving and absorbing. Few individuals in Botswana are still alive, who are a depository of such in-depth, rich and invaluable knowledge. His profile is an important historical narrative, full of startling insights and candour which provide a sweeping sense of where Botswana has come from as a nation.

In his interview with Mmegi (2015) Mr Mogwe recalled how as Permanent Secretary to the President in the 1970s under the founding President of the Nation, Sir Seretse Khama, he used to calculate the development and recurrent budget of Botswana on the back of a box of matches – this narrative is an illustration of how poor the country was.

Mr Archibald Mooketsa Mogwe is a former Botswana politician and a consummate diplomat par excellence. Having served as Botswana’s Foreign Minister from 1974 to 1984, and the Minister of Mineral Resources and Water Affairs from 1985 to 1994 as well as the Botswana Ambassador to the United States of America from 1995 to 1999, Mr Mogwe has undoubtedly played an immense role in the socio-economic development of Botswana during both its pre and post-independence eras.

An embodiment of the long-tested development principles of Democracy, Development, Botho and Self-Reliance, on which the survival of Botswana has been anchored since 1966, Mr Mogwe’s story is an important piece in Botswana’s history puzzle.

15 Facts you may not know about Archibald Mogwe

1. Archibald Mooketsa Mogwe, who is 98 this year, was born in Kanye on the 29th August 1921. He grew up in Goo-Moswaana, which is now called Mmathethe.

2. Mogwe comes from a large family  – the second born in a family of 10 siblings. Growing up, he was forced to go to church and used mortar and pestle to prepare mielie-meal for the family.

“During our times, boys were treated just like dogs while the girls were always given preferential treatment.”

3. His father never really wanted him to get educated and to him, a boy belonged at the cattle post and not in the classroom. Surprisingly though, he says, his father had a soft spot for his elder brother who was given the nod to attend school while Mogwe was made to herd cattle.

“I was made to trek cattle and goats from Goo-Moswaana to Molepolole on foot.”

5. He would later go to Tigerkloof where he studied teaching.

He speaks highly of Chiepe’s intellect and substance. Mogwe says Tigerkloof was a one-stop learning centre where almost everything was taught.

“You could go there to learn sewing, leathery, farming, teaching and any other profession you can think of.”

6. When the likes of Chiepe were sponsored by the  Government to go and further their studies abroad,  the same opportunity was never extended to Mogwe as authorities were of the view his parents could afford to sponsor him.

He nonetheless told Chiepe, “When you come back with your Bachelor of Arts degree, I would have also found a way to acquire it.”

And he did. While going through a South African newspaper, Mogwe saw an advert calling for teachers in the Free State in South Africa. He applied and was accepted. He taught in Free State for six years and says he earned four times what he earned in Botswana.

7. Mogwe started his career in the civil service as Education Inspector but his big break came when he was appointed Permanent Secretary to President Sir Seretse Khama after Botswana gained independence, making him the first ever local to hold that role.

“From Office of the President I worked somewhere but I can’t immediately remember.”

“I was known all over the world. When I entered the room, everyone knew Mogwe was around.”

“I switched Mogwe from foreign affairs to minerals. Mr Mogwe’s colleagues had begun to think he was drifting away from  Botswana, and that he was seeing himself more as an international politician.

In the 1979 elections, people like Mr Ngwako wanted Mr Mogwe to fight an election and lose, so he would be brought down to Mother Earth and be dropped from the cabinet.”

According to Ambassador Legwaila Legwaila, in the 70’s there was no country that could be considered the enemy of Botswana because of Mogwe’s leadership of our foreign policy.

11. In March 1982, Mogwe was part of the delegation mandated for a peacekeeping mission charged with reconciling warring factions in Chad alongside Kenya’s then Foreign Minister Dr Peter Onu and the Chairman of the OAU Council of Ministers Dr Robert Ouko.

12. He was appointed Minister of Mineral Resources and Water Affairs from 1985 to 1994, during which time he was signatory to the formal launch of the Sua Project. While at

Mineral Resources,  Mr Mogwe also signed a Memorandum of Understanding on the 400KV interconnector transmission line between South Africa and Zimbabwe through Botswana.

13. In 1995,  Mr Mogwe was appointed Botswana’s Ambassador to the United States of America where he was accredited to Brazil, Mexico and Canada. He was instrumental in the purchase of the Botswana Chancery in Washington DC.

Those who worked with him as an Ambassador describe him as a prolific writer who used to dictate entire speeches to his secretary.

14. Shortly after his return from Washington in 1999, Mr Mogwe joined Sir Ketumile Masire in his Office of the Facilitator of the Inter-Congolese Dialogue, as head of the Office in Gaborone.

In 2001, Mr Mogwe led a delegation from the Office of the Facilitator of the Inter-Congolese Dialogue, which toured the eleven provinces of the Democratic Republic of Congo, supervising the selection of representatives from political and civil-society sectors who were to participate in the inter-Congolese dialogue.

15. In recognition of his extraordinary and selfless service to this country, Mogwe has over the years received various awards:

An MBE is an award given by the Queen to an individual for outstanding service to the community or local ‘hands on’ service. The definition of MBE is Member of the Most Excellent Order of the British Empire.

Fact Check: As HE Dr MEKM said on Friday at the BDP Congress in Kang;