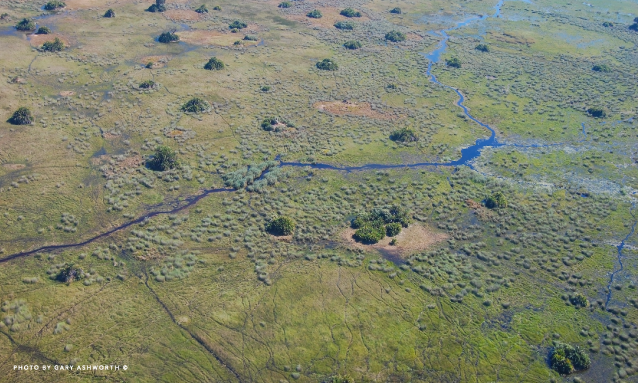 Our helicopter flew low over the brown, dusty suburbs of Maun and then over the parched scrub beyond, heading north. “There it is,” said the pilot, pointing down to a fence running from east to west. “This is where the adventure really begins.”

Abruptly gone was the thirsting earth and the bony cattle, replaced with more than 7,000 sq miles of papyrus swamps and lagoons carpeted with waterlilies, and palm-tree islands, where giraffe tugged at the high branches of acacia and huge herds of zebras, waterbucks and elephants grazed, the whole world beneath our rotor blades now so brilliantly green it hurt the eyes.

The Okavango Delta is part Edenic — no roads, almost entirely unmarked by the trespass of man — and part Jurassic Park: the fence, the lost-worldness of it, the giant spur-winged geese flying under us like pterodactyls, the four-metre dinosaur-like crocodiles on the banks, the prehistoric-looking baobab trees.

Here was one of the planet’s great quirks of nature, formed by the winter rains that fall in Angola’s highlands, then flow south looking for the sea but finding only a tectonic trough in the Kalahari. With nowhere to go, the water turns the desert in the height of summer into one of the most fecund places on earth before draining away into the sands. If, in Jurassic Park, man plays God, then here God plays himself.

To get a sense of the scale of the delta, I was going to spend a week traversing the whole thing, from the tip of the panhandle in the north, all the way back to Maun, a journey of about 160 miles, using helicopters, speedboats, traditional mokoro dugout canoes and my own two feet, staying at mobile campsites along the way.

We flew north at 300ft, our shadow skimming across the wetlands, racing the shadows of saddle-billed storks and African fish eagles, of which the delta has the highest concentration on the continent.

Sitting next to me was Simon Byron, 36, my Botswana guide. He pointed out the papyrus beds that filter the water, making it so pure you can drink it; the long “highways” of coconut palms, formed along ancient elephant routes by the animals depositing the indigestible seeds; the narrow channels worn down by hippos to form their superhighways and which act like arteries, distributing the delta’s water so that it doesn’t become a swamp; and the thousands of islands, some as long as 40 miles, which began as termite mounds in which trees took root. In the Okavango, it was the animals that were the architects, landscapers and labourers.

Botswana is one of the flattest countries in the world, but ahead of us, rising up, were three lonely chunks of quartzite schist: the Tsodilo Hills, sacred to the indigenous San. We flew around them, seeing the brilliant streaks of mauve and turquoise and lavender in the rocks, before landing nearby. Our group of four had the entire place to ourselves (Botswana, the size of France, sees only 280,000 holidaymakers per year, the delta fewer than 100,000, owing to controlled access and high prices at the upscale lodges). We took a tour with a local San guide, Bow, who explained how the hills appear in the San creation story and showed us haematite rock art that suggested the San had been in the area for 30,000 years.

We flew south along the panhandle. It is through the narrow channel in March that the waters started to trickle and pulse; slowly, almost imperceptibly, as the land drops only 200 feet in 280 miles. By May and June the flooding of the delta begins in earnest and the 482 species of bird, 130 species of mammal and 64 reptiles that call the Okavango home enjoy the abundance as the desert comes to life. By October, the waters start to disappear.

Below us we could see the spreading out of the alluvial fan and soon afterwards we dropped in to the remote Xaxwii mobile camp in the Moremi game reserve, its 1,900 sq miles the only part of the delta officially cordoned off for the protection of wildlife. The camp had a few simple tents, longdrop toilet and bush shower pitched under a grove of jackalberry trees, and was part of a chain of five sites in Moremi owned and used exclusively by the Botswana Guides Association. The chopper took off and left us in the middle of nowhere. From now on we would be travelling by boat or on foot.

While the crew cooked up great slabs of beef on the fire pit, and a vast moon, blood-red from the African dust, rose in the east, Simon gave us a safety talk. Remember, he said, that out here you are just another part of the food chain. If you go to the toilet, take a torch and make lots of noise lest you startle a hippo, leopard or hyena.

“Elephants will come through the camp at night looking for jackalberry fruit,” he said. “If you meet one, clap loudly and stand your ground. Let him know that you are not afraid.”

I tried to imagine what that would be like, facing down a bull elephant in the night, or meeting a leopard while sitting on the loo, and decided to stay in my tent until dawn no matter what, a decision vindicated by the nocturnal soundtrack of ground-shaking footsteps and farting just the other side of the thin canvas wall, and, in the morning, a set of fresh lion prints nearby. After breakfast, we set off on a foot safari, Simon at the front, encouraging us to stay close together in single file to minimise the impact on the land and also for safety.

“That lion from last night is no doubt watching us,” he said.

A tent on dry land in the delta

We waded across some of those hippo superhighways, walked through thick scrub of wild basil, sending up blooms of fragrance, and through groves of sausage trees, laden with long, pendulous fruit. Simon found fresh buffalo tracks and thought the animal — one of the world’s most deadly to humans — was very close, telling us to keep quiet and still. Above our heads, in a mangosteen tree, a go-away-bird made its nasal and elegiac “kewh” or “go way” call, revealing our position to the buffalo and forcing us to move. Simon had a can of pepper spray hanging from his belt, but carried no gun. Having one made you more reckless, more cavalier, he said; without one, your relationship with the animals changed from dominion to deference.

We climbed a large termite mound to get a better view of the surrounding plain, displacing a herd of impalas that had been doing the same thing. A dozen kudus thundered past. A Verreaux’s eagle-owl looked down on us from a nearby baobab. Simon tossed up some fine white powder from a pouch, the ash of the leadwood tree, used by bushmen to know the wind direction, vital for staying safe from predators.

As far as the eye could see were animals — elephants, zebras, giraffes, warthogs, baboons, antelopes of every conceivable strain — so many and so varied that it looked almost clichéd, straight out of Disney. And nowhere was there a single sign of people, no fag butts or litter, no signs or footpaths, no buildings or electricity cables. It felt like we were the only humans left alive.

The next morning we broke camp and set off by swamp cruiser, the shallowness of the water meaning that we had to travel at speed to get the boat planing. We slalomed through the serpentine channels, the African skimmers, egrets and pied kingfishers scattering before us, like an avian fireworks display. We passed so many elephants— there are an estimated 140,000 in the delta, half of the continent’s total — that we almost stopped noticing them.

We killed the engine to watch a leopard sitting on the bough of a baobab guarding the dead klipspringer it had dragged up with it; a giant Nile crocodile slipped through the narrow gap between the boat and the bank. Up ahead, a bloat of hippos, 60 strong, eyed us, the grumpy chorus of grunt-grunt-whoops getting more frenzied and angry until several started to move towards us, like three-ton torpedoes.

The hippos disappeared under the surface, the water boiling and eddying, as Simon gunned the engines, shouting “hold on tight” as we sped away, bracing ourselves to be tipped over.

“If you do end up in the delta with hippos,” Simon had told us, “swim underwater for as far as possible or you’re done.”

We turned a corner and there waiting for us were four mekoro, the narrow traditional craft of delta bushmen, made from the hollowed-out trunk of the jackalberry, and beside them, four men with the long poles used to power them, punt like, by pressing into the river bed.

We were now heading for Delta Camp, one of the region’s oldest lodges, only reachable by non-motorised transport to minimise any impact on the delta. The gunwales of my mokoro sat just centimetres above the water, the boat twitchy, as we glided and swished though the waterlilies, past crocodiles on the bank, immense jaws wide open, as if mocking our perilous state.

Taking a speedboat across the flooded plains

At Delta Camp, I was put in a tree house, some 50ft up in the canopy. The rooms had no glass in the windows so I lay on my bed as bats flew around my head and vervet monkeys ferreted around for things to steal (a lockable box was provided for exactly this scenario). Later, I dreamt that I was in an earthquake, only to wake up and look down to see a bull elephant scratching itself against the tree trunk. In the morning, I sat on the little platform of my room before sunrise, listening to Africa awakening, like an orchestra tuning up. Below me, the waters of the delta dark and oleaginous. Somewhere, a hyena growled.

“I never knew of a morning in Africa when I woke up and was not happy,” wrote Ernest Hemingway. Quite.

We carried on south, seeing not another soul during long days out on the delta. Simon would find us spots to swim, in places with no cover and clear gravelly beds — “crocodiles are ambush predators” — and you realised that, out there, without the knowledge of guides such as Simon, our life expectancy would be pretty low.

On our last night, after pitching camp, we headed off in the boat to drink sundowners while watching a big group of elephants, spooked by a buffalo, crash and trumpet across the river before disappearing noiselessly into the forest.

A large flock of endangered wattled cranes, some 100 of them — “I’ve never seen so many together,” Simon said — went through their courtship dance, leaping up in the air as if the ground were too hot for their feet, before flying off en masse across the huge setting sun, like a Japanese sumi-e painting, the only sound that of the beat of their giant wings.

On our last day, we saw the ridge in the distance that marked the edge of the tectonic bowl, nature’s dam wall, the end of the delta. We started to encounter the day boats out of Maun, full of tourists; a shock to the system after our week of isolation. We passed the buffalo fence, designed to keep cattle out of the reserve and wild animals in it. We puttered past a house whose garden had neat flowerbeds and little territorial fences, where a dog ran about, snapping delightedly at the jets from the sprinkler that kept the lawn verdant and lush. The wildness of the Okavango Delta already felt like a long way away.