Botswana is to set up solar energy plants to cut down on emissions from the current coal-fired power station. The 100MW Solar Power Plant will augment Botswana’s  power supply and reduce the country’s carbon footprint and help conserve the environment. Botswana has one of the highest solar energy ratings globally, the mostly sunny days the country receives annually stand it in good stead to realise its aspirations for greener energy.

The sun is free, in abundance and inexhaustible. Solar technology converts the sun’s radiation directly into electricity with no pollution or damage to the environment. The panels can generate enough power to run stoves, pump water, light clinics and power televisions. Botswana is a semi-arid country with mostly sunny days, very idea climate for solar energy.

The investment in the 100MW Solar Power Plant sets the stage for Botswana to fully exploit this natural resource that it has in abundance. This will also see Botswana begin to deliver the nation’s Vision 2036 commitment and Botswana’s national commitment under the Paris Climate Agreement for a significant proportion of its energy to be sourced from renewable green sources.

This development forms part of Botswana’s efforts to fulfil the Paris Agreement expectations, which it signed to increase its green energy mix by 25percent within the next seven years. Consequently, the government has taken its first steps towards a greener environment through the employment of solar power plant projects in rural areas. Tobela village is currently benefiting from green energy during the day and powered by Botswana Power Corporation (BPC) through the night. Botswana currently gets its power from the coal-fired Morupule Power Station located in central Botswana.

Twenty remote villages are to benefit from solar energy plants, with Seronga, near the Zambia border, being the first village to be powered by solar. The solar power plants follow a 1.3MW power station in Phakalane in Gaborone. 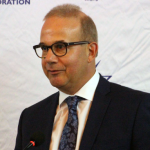 “Botswana has pledged to establish 250MW on solar capacities by 2025 as a way of reducing carbon dioxide emission to zero by the year 2036.  We have taken the bold step to ensure that the government attains its aim as we are currently embarking on building solar power plants to electrify more rural areas. The project includes the construction of a 100MW Solar Power Plant next year as well as the electrification of more rural areas,” says Botswana Power Corporation’s Chief Executive Officer Stefan Schwarzfischer.

Schwarzfischer says the development has motivated the enhancement of specific sectors to include agriculture, mining, agronomy, energy, waste management through the economic diversification drive (EDD).

Botswana needs to establish 250 megawatts from solar capacities within the next 10 years. The use of cheaper and more sustainable solar power will activate progress in these different sectors and in turn, benefit the country at large.  Early last year, the Ministry of Mineral Resources, Green Technology and Energy Security said about 145,000 out of the 242,000 households can be reached by the end of 2021 if the off-grid solar was implemented in 2018. This equates to 60% of the total off-grid market or an installed capacity of approximately 30MW.

Solar power popularity has spiked through the world across all sectors, from households to utility scale as well as on and off the grid. Historically, solar energy has been prohibitively expensive to produce on an industrial scale. However, for the past 10 years, the price of the solar panels (principal solar plants component ) has dropped significantly. Some experts have gone so far as to assert that prices have dropped by as much as 80%.