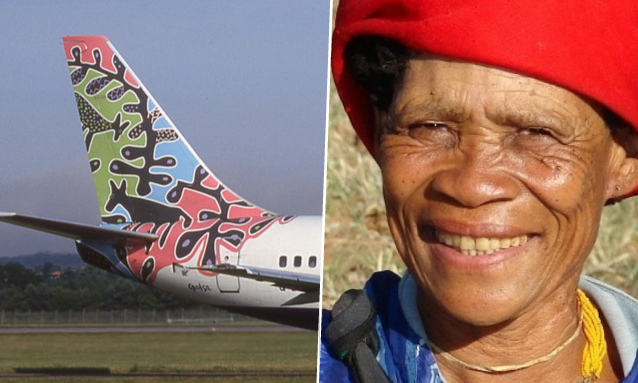 When British Airways was looking for art design for their aircraft’s tail in 1997, they settled for the artwork of Cg’ose Ntcox’o, a Khoisan woman from Botswana.

Also known as Cgoise, she was a member of the Ncoakhoe tribe of the San people. Born circa 1950, she was part of the Kuru Art Project and in the 1990s had a number of her works featured in some prestigious galleries in the world. It was from such a gallery in London that representatives of British Airways saw and liked her work enough to send someone to meet her in Botswana.

Upon arrival, the representatives persuaded Ntcox’o to put a mark on the contract they had brought. As she was illiterate, she did not know that she was selling the rights to her work by making a cross on a piece of paper.

“I just saw this person who said he was from London. He gave me a piece of paper and told me to make a cross,” she said.

She would find this out when she saw her painting of hyenas and trees used on the tails of British Airways fleet as part of its global make over.

“I may be illiterate, but I’m not stupid. I know what my artwork is worth,” she said to Mail and Guardian in an interview in 1998.

For her work, she was paid what is currently worth $1100. She used the money to buy seven cows, build herself a shack on the edge of the Kalahari desert and give out the rest to her relatives, who she was supporting as her husband was ill and daughter unemployed.

Despite her displeasure at her treatment by the airline company, the representatives said that she had received a fair deal and that she could console herself with the knowledge that her work is now known across the world.

The collective under which Ntcox’o worked and which pocketed 50 per cent of the painting sold to British Airways also claimed that she did not need the money since her tribe was a pre-cash society. 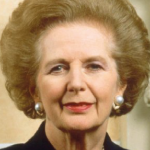 “The artist is illiterate. She is happy. She has no need for money,” trust representative Rein Dekkar declared as quoted by M&G.

In Britain, the artwork was met with anger and criticism, with former prime minister, Margaret Thatcher, swiftly expressing her displeasure by covering the tail of one of the jets with a handkerchief, saying,

“We fly the British flag, not these awful things you are putting on tails.”

In 1999, she travelled to New Mexico, United States with three other artists from Botswana for a project with four artists from the pueblos of New Mexico. They produced lithographs to represent a colourful and varied interpretation of the idea of the trickster.

Her work has been featured in the Portland Museum as well as on city and county government building in Albuquerque, New Mexico.

Following the deaths of her only child in 1999 and husband in 2003,  Ntcox’o was taken in by neighbour and fellow artist Coex’ae Qgam (also known as Dada) until her own death in 2008, leaving Ntcox’o on her own again.

Ntcox’o moved around from friends and relatives and was eventually taken in by another artist Qgocgae Cao with whom she stayed until her death in 2013.