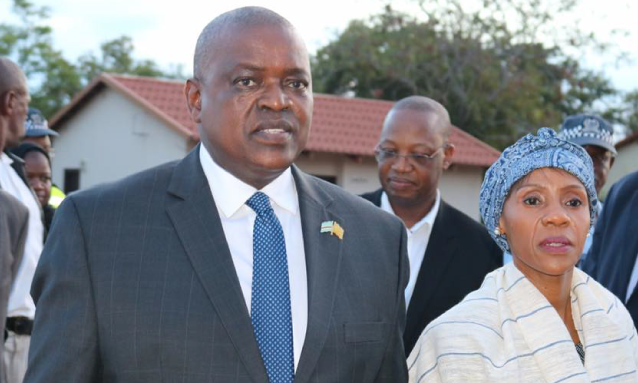 His Excellency, President Dr Mokgweetsi Masisi recently paid tribute to Richard Eaton – one of Botswana’s very first politicians – during a visit to his homestead near Qabo.

He was accompanied by First Lady, Neo Masisi, former and current legislators, councillors and other dignitaries. Dr Masisi, who is big on celebrating people while still alive, said it was important to honour Eaton, given the role he played in transforming Ghanzi.

He said Eaton was a brave man since he served Botswana back when it was one of the poorest countries in the world. He said Eaton was part of Botswana’s second cohort of Ministers, serving only one term in 1969.

The President said as such, it was befitting to thank him and his family for the sacrifices he made to serve Botswana.

“Thank you and tell your former South African’s to learn from you,” stated Dr Masisi.

“Batswana would also like to thank you, you have received national honours but we wanted to seat and converse with you,” he said.

The Member of Parliament for Ghanzi South, Christiaan De-Graaf described Eaton as the father of Ghanzi and a gentle giant who made Ghanzi what it is today. For his part, former cabinet minister, Ray Molomo said Eaton served during a time when politicians went to Parliament with the sole purpose of serving the nation and not to enrich themselves.

“Those days, people went to Parliament to serve and not to earn a salary. There were no primary elections, you were just requested to serve,” he said.

Molomo thanked the President for having made it possible for him and other former cabinet ministers to express their thanks to a man who had served Botswana with dedication. Eaton, who turns 95 in March, said he was never a good politician but whenever the opportunity to do something that benefited the country presented itself, he would seize it.

He explained that he initially arrived in Botswana from South Africa to survey farms, a job that lasted five years. Once the job concluded, Eaton decided not to return to his native South Africa as he’d fallen in love with Botswana. He subsequently served as the first chairperson for Ghanzi District Council until 1969.

Eaton told the President that monopoly is harmful to the country, adding;

“We hope that the incumbent will do everything to fight monopoly of the BMC.”

President Masisi and the First Lady presented Eaton with gifts as a token of appreciation from the government.

Posted In: Our People
Tagged In: Ghanzi, HE Mokgweetsi Masisi, Qabo, Richard Eaton