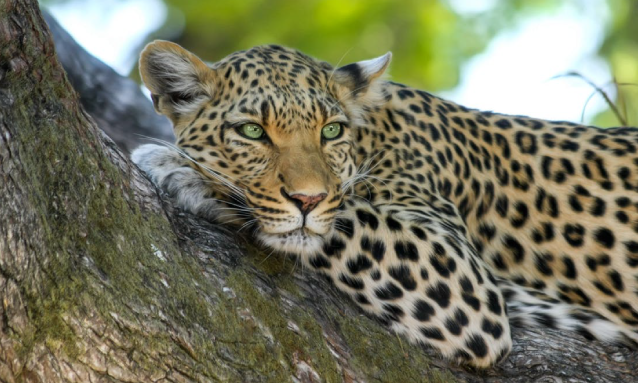 Lightning arcs in the distance as our 12-seater Wilderness Safari propeller plane lifts off from the runway at Botswana’s Maun International Airport. The pilot, within arm’s reach, is pulling levers and flicking switches placidly despite the occasional quick dip that brings my stomach into my throat. We’re cruising just below the cloud layer, and the flat landscape of the Okavango Delta—a UNESCO World Heritage site known for its concentration of some of the world’s most endangered large mammals—stretches infinitely in all directions. It’s the beginning of the rainy season, though we’re arriving in the midst of a dryer-than-usual stretch. It’s a bit hard to envision these little green patches below as pinprick islands surrounded by the waters of the flooded plains. For now, the dry watering holes are connected by a dizzying network of animal paths, giving the entire landscape the appearance of wrinkled elephant skin.

We land almost an hour later after making a few stops at other airstrips. The routine is always the same—a quick pass over the runway to check for wildlife followed by a turn to come in for a landing. Propeller still in motion, the doors open, guests load on and off and we’re on our way. I jot down in my journal that it’s all a bit like the Uber Pool of the Bush—clearly I have yet to disengage from the city. After I retrieve my hat that was blown off by a gust from the propellers as I exit the plane, we are handed cool towels and water and whisked into a waiting Land Cruiser before bumping along the dusty path to our first camp, DumaTau. 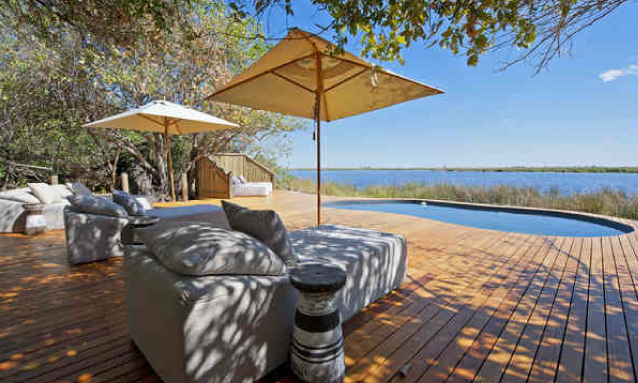 As with most of the Wilderness Safari properties, DumaTau is cleverly hidden among the trees—a squint-and-you’d-miss-it presence—and raised slightly on stilts to take advantage of the views. The 10 tented en-suite guest rooms hover just over the edge of the Osprey Lagoon, a haven for all sorts of wildlife in this dusty landscape.

During our two night stay, we are roused in the middle of the night by a hippo very keen on splashing just beyond our deck, and visited by a roving herd of elephants, one of whom practically greets us at our front door after our morning game drive. Understandably, guests are escorted to and from their rooms at night, and walkie-talkies are provided in the rooms just in case. I find myself groping for the walkie on my bedside table once or twice in the dark night, having visions of leopards or elephants crashing through the thin screens and canvas that separate us from the wild. Being so exposed is an eerie feeling at first, to be sure, but the serenade of chirping frogs and grunting hippos becomes familiar in due course.

Days begin with a 05.00hrs wake-up, followed by a light breakfast at 5:30. Invigorated by a zip of caffeine and the crisp morning air, it’s time to set off for the first game drive of the day. At some point along the way, we’ll likely pause at a scenic spot for tea and a bite before making our way back to camp around 11 for brunch and some R&R. At 4 comes tea and more snacks, followed by the afternoon drive from 4:30 until just after sundown, punctuated by a sundowner cocktail or glass and bite. Dinner is around 7 and the bar is always open—and included—so a nightcap is often in order.

To recap: you’re driven around all day whilst eating and drinking. It’s both deeply lazy—often the farthest I walked in a day was to and from the Cruiser and our room—and high-adrenaline—there’s a lion brushing against the side of our car! Gyms and pools are available at many properties, and weights and yoga mats are in most rooms, though you may find it hard to convince yourself to spend your downtime on a treadmill instead of with a book and a cup of tea.

While DumaTau means “roar of the lion,” the (conservatively estimated) 150 elephants we saw during our two-day visit suggest that perhaps it has been named for the wrong animal. We do, however, follow two male lions for quite a while after some diligent tracking by our guide, Tops. The experience culminates with a roar that elicits a few expletives as the two fight over a discarded leopard kill not four feet away from the Cruiser, pausing only to look up with blood-matted faces to be sure we aren’t a threat to their meal. An apex predator looking directly into your eyes is quite something. 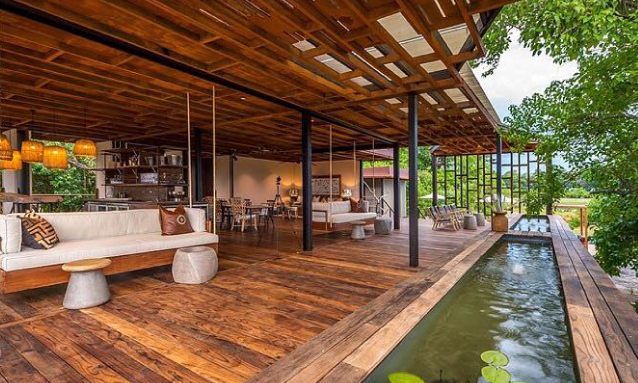 The sleek lines of Qorokwe Camp, our next stop in the Delta, provide a modern contrast to the more classic safari aesthetic of DumaTau. The eight suites are enormous, with sitting rooms and soaking tubs overlooking a lagoon. Swap the screened walls for glass and add climate control, and you could be at a luxury hotel suite anywhere in the world. The fans mostly do the trick of cooling down the room (mind you, we were guests during the hottest part of the year) and the screens serve their purpose, though at any of the camps, expect some moths, gnats, spiders, and even a tiny lizard or two. The giant mosquito nets around the beds do a fine job of keeping out most pesky visitors at night, though the gnats are tiny enough to slip right through and can be a tickly, though harmless, companion as you drift off to sleep.

By now, the impalas, giraffes and elephants that at first made me grab for my camera or gasp when they popped out of the trees are beginning to feel a bit quotidian. I find myself scanning the ground looking for tracks, looking around the group of herbivores for signs of stalking predators. I ask our deeply knowledgeable guide, Alan, “Were those baboons alarming?” (making a ruckus because they spied a predator) or “Have any of the cars spotted a bamba?” (a fresh kill). In my own little way, I’m starting to feel like I have the lay of the land. At one point we leave the confines of the car for a guided walk, and I find myself terrified even though we aren’t looking for game, instead focusing on the finer points of termite mound architecture and deciphering elephant tracks.

Later, we’re taken for a ride in a mokoro, or dugout canoe, and I ask our exceedingly patient guide more than once if the water is deep enough to be concealing crocodiles or hippos (it’s not). My apprehension gives way as, low to the water, I can focus on the lily pads, the diving kingfishers, and the fuchsias of another magnificent bush sunset. The glass of Champagne waiting for us on shore doesn’t hurt either. That night, we set out after dinner for an after-dark game drive. On this moonless evening, the Cruiser’s headlights and Alan’s handheld searchlight are truly the only illumination in the enveloping black. When Alan stops the engine and turned off the lights, plunging us into total darkness, the fear is absolutely primal. With senses so heightened, the stars shine brighter and the silence pulses.

Our final stop is Mombo Camp, rebuilt this year as Wilderness Safari’s flagship property and situated on the Moremi Game Reserve, deservedly known as “the Place of Plenty.” Time and time again on our trip we’d heard seasoned safari-goers rhapsodize about the camp.

We encountered three safari-focused travel advisors during our visit and heard some version of the same praise: “Botswana is the pinnacle for safaris; Moremi is the pinnacle reserve in Botswana; Mombo is the pinnacle camp in Botswana.” “So, logically,” I had asked once mid-flight, “Mombo could be said to be the best safari camp in the world?” Very earnestly she responded, “Oh yes, my dear, of course.” Anticipation was high as we touched down.

Our room at Mombo isn’t a room at all—it’s more like a home. The foyer is thoughtfully kitted out with hats, a tote, and a professional Olympus camera and binoculars (there is a set in every room), the sitting room and its bar are suitable for entertaining, the grand bedroom overlooks a massive porch with plunge pool, day bed, and outdoor shower, and the bathroom’s copper soaking tub is dreamy. But as always with Wilderness Safaris properties, the resort quickly becomes a backdrop for the wilds just beyond. No sooner do we kick off our shoes and plop down for a bit of reading than we notice a baboon enjoying a sip from our plunge pool. Moments later, a gang of his friends make our porch and roof their jungle gym, screeching and swinging from every surface. We spend the better part of an hour sitting on our bed, laughing and watching, utterly enthralled. 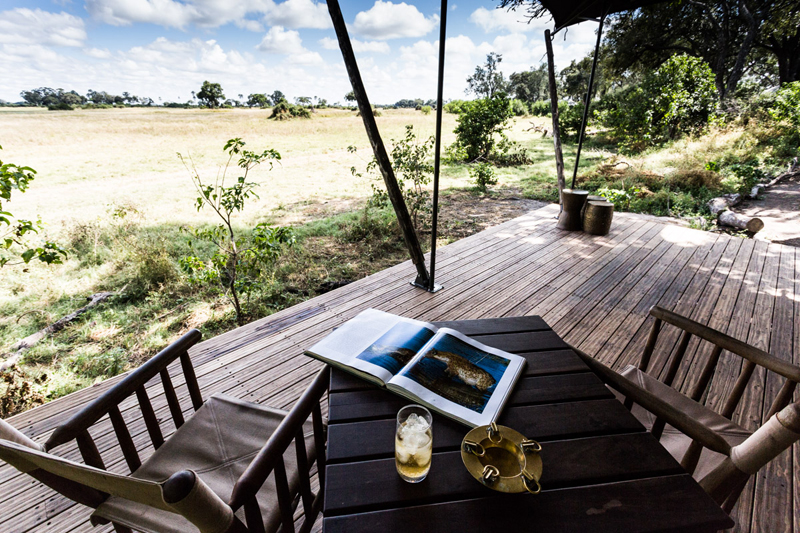 On our drive the next morning, we stop for tea at the edge of an expansive plain, and watch, mug-in-hand, dozens of impala and red lechwe, hyenas, giraffes, four white rhinos, zebras, a mom and baby hippo, and a troop of baboons go about their business before us. We then observe a pride of 14 lions emerge from the bushes to hunt. That afternoon, we track a female leopard and are met at the scene by a National Geographic videographer filming the leopards for an upcoming documentary.

First thing the next morning, we see a fresh impala kill being eaten by wild dogs, bones picked clean by a swarm of vultures, followed by hyenas moving in to finish the job—all in the span of 10 minutes. That night, under a canopy of stars, I wonder aloud to a German couple if this kind of animal encounter is normal. “I’ll put it this way: In many parks, you look for other cars in order to find the animals they’re surrounding,” the man says. “Here, it is quiet. It’s simply you and the animal.”

As we peruse the impressive wine list, or slip into the crisp sheets in the palatial room, or drift away to a massage overlooking the flood plains, it’s hard to not be a bit self-conscious about enjoying such decadence in the middle of the Bush. But it’s all part of the ethos of Wilderness Safaris, what they call “responsible luxury.” It would be fair to be suspicious of a term like that, but it’s backed up by substantive initiatives and impact. The company is eco-friendly in the truest sense, the most immediately obvious evidence of which is the solar panels that power all three camps. Charity is a central tenet; their partnership with Children in The Wilderness provides educational programs for children in rural Africa to help raise awareness about sustainable conservation.

Wilderness Safaris is, in effect, a conservation company funded by tourism, even operating some properties at a loss to continue to support local communities and conservation efforts tied to the location. The Botswana Rhino Reintroduction Project, started in 2000 to reintroduce wild rhinos to the Okavango Delta, is one of the most notable initiatives, growing wild white and black rhino populations from effectively zero in 1993 to an estimated 100 and 30 respectively by 2020. These figures seem abstract until we come upon a mother white rhino and her baby. We watch as the calf—a third generation product of the reintroduction efforts—circles his mother and lies down to nurse.