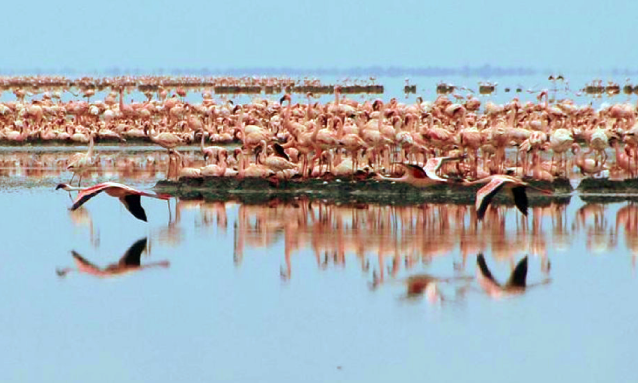 Makgadikgadi wetland in Botswana is the most important breeding site for Flamingos in southern Africa. But human activity is damaging this vital ecosystem. A multi-tiered project implemented by BirdLife Botswana has helped to protect the integrity of this wetland.

The Makgadikgadi saltpan complex in northeast Botswana is one of Africa’s largest ephemeral wetlands, covering 12,000km2 of land in the middle of the Kalahari Desert. During rainy seasons, its extensive pans are often filled with water from rivers such as the Nata, Boteti and Mosetse.  This wetland is an invaluable asset to both birds and people. It contains the most important site in southern Africa for the Lesser Flamingo Phoeniconaias minor (Near Threatened) and Greater Flamingo Phoenicopterus roseus, which are both on a decline in the region, and is a habitat for several more threatened migratory bird species. It is also a vital source of water and other natural resources for local communities.

For these reasons, in 2001, Makgadikgadi was identified as an Important Bird and Biodiversity Area (IBA). This decision also benefits the Great White Pelican Pelecanus onocrotalus and regionally threatened raptors such as Bateleur Terathopius ecaudatus (Near Threatened), White headed Vulture Trigonoceps occipitalis (Critically Endangered), Martial Eagle Polemaetus bellicosus (Vulnerable) and the Tawny Eagle Aquila rapax (Vulnerable), which forage over the area. Non-bird species including the Blue Wildebeest Connochaetes taurinus and the lion Panthera leo are also found in the area.

People living in the Makgadikgadi region use its expansive land for a range of livelihood activities such as tourism and farming – both livestock and arable. Unfortunately; overgrazing, pollution and disturbance from local tourism and domestic activities are having an adverse effect on biodiversity, soil fertility and the quality of water in the wetland. The prevalent land and livestock management processes in the vast ecosystem are likely to compromise the continued flow of ecosystem goods and services from the savannah, which are necessary to sustain the national economy, livelihoods and the rich fauna and flora diversity. 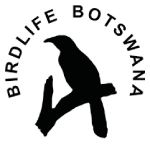 BirdLife Botswana is helping to mitigate these issues and protect the natural resources of Makgadikgadi. With funding from the Global Environment Facility (GEF) and the United Nations Development Programme (UNDP), BirdLife Botswana formulated a multi-tiered approach to deal with the interconnected set of challenges in the area. A 3-year project known as…

“Using Sustainable Land Management to improve the integrity of the Makgadikgadi ecosystem and to secure the livelihoods of rangeland-dependent communities,”

…was implemented from 2014 to 2017. It was implemented in partnership with key stakeholders including the local government. The project focused on solving issues related to the unsustainable use of land in four pilot villages in the greater Makgadikgadi region. The villages are Mosu, Mmatshumo, Mokubilo and Mmea. The selected villages surround the Southern part of the Sua pan in the Makgadikgadi where key flamingo species breed.

The project involved local communities in the process of mainstreaming Sustainable Land Management (SLM) principles into rangeland management and governance, to secure ecosystem goods and services required to develop and maintain biodiversity. Meaningful participation by communities improved their knowledge and skills in conservation practices, and motivated them to adopt the SLM approach in arable farming, livestock management and livelihood support systems.  In collaboration with government and communities, particular attention was given to the lack of integrated local land-use plans and inadequate user-right privileges for resident natural resource users.

At the end of its 3-year cycle, the project made significant gains. The major achievements include approved land use plans for the 4 villages where it was implemented, improved income from farmers using conservation agriculture and improved herd management techniques.

The project also established two functional livestock associations in the Boteti region – small stock association and beef farmers association. There was also a substantial increase in livestock productivity in the area and this has helped reduce grazing pressure on land. The local communities’ capacity to monitor the rangeland was improved through training programs. The district benefited from support in the preparation of an integrated, district-wide plan with spatially-explicit (GIS-based) maps where different sectors such as tourism, settlements and agriculture could best be allocated land parcels.

This project is a poster child of how the inclusion of communities in conservation is key. It also shows the need for conservation organisations to be mindful of the needs of community members, which are often the underlying causes of natural resource degradation. Therefore, empowering community members by showing that they can generate an income in a more sustainable, effective manner, will have a snowball positive effect on biodiversity in the region. Less pressure on natural resources from such activities will allow enough time to recuperate from extraction processes and continue providing for biodiversity and man for generations to come.