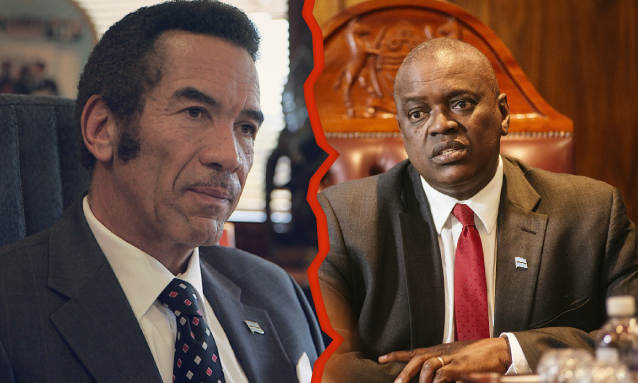 President Mokgweetsi Masisi on Monday revealed that efforts by a council of elders to mediate in his frosty relations with former president, Ian Khama have failed. Delivering his maiden state of the nation address, Masisi said the nation is all aware..

“that the transition from the previous administration has not been as smooth as expected.”

“However, it ought to be noted, I have in my attempt to smoothen the process, engaged senior citizens namely; His Excellency former President Dr. Festus Mogae, His Honour Former Vice President Dr. Ponatshego Kedikilwe, former Speaker of the National Assembly, Honourable Ray Molomo, Honourable former speaker, Patrick Balopi and Honourable former minister, David Magang to assist and lead in smoothening the transition.”

“I regret to announce that their efforts have not borne fruit up to this point. In the true tradition of Botswana, such mediation should be managed, for the benefit of everyone. Worth noting, however, is that there is in place legislation that governs the benefits and entitlements of Former Presidents. The search for a lasting settlement shall continue.”