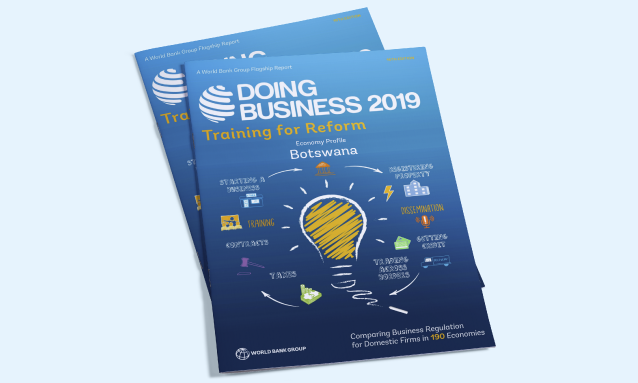 According to the latest edition of Doing Business 2019: Training for Reform report, released last week, Botswana has been ranked 86 out of 190 economies in the ease of doing business.

While Botswana’s relative ranking has fallen this year, it also showed a slight improvement in its doing business score – a measure of an economy’s absolute progress towards meeting regulatory international best practice. Specifically, Botswana has streamlined the inspection system associated with construction permits, a move which is commended in this year’s report.

“Economies in Sub-Saharan Africa carried out more than 100 reforms over the last year to improve the ease of doing business. This is a new record for the region, making it an exceptionally competitive period,” said Xavier Furtado, World Bank Country Representative to Botswana and Special Envoy to SADC.

“Timely collaboration and coordination across the multiple government agencies is essential to ensuring the effective design and implementation of necessary reforms. The World Bank Group stands ready to continue supporting Botswana in its efforts to create a conducive environment for investors and entrepreneurs.”

The World Bank Group supports the Government of Botswana in business regulation reform through the Botswana Economic Diversification and Competitiveness Reimbursable Advisory Project works closely with the Ministry of Trade and Industry, the National Strategy Office and the related ministries and agencies to support the implementation of Botswana’s Doing Business Reform Roadmap.

Economies in Sub Saharan Africa set a record for a third consecutive year, carrying out 107 reforms in the past year to improve the ease of doing business for domestic small and medium enterprises. The latest reforms were a significant increase over the 83 reforms that were implemented in the region the previous year.  In addition, this year also saw the highest number of economies carrying out reforms, with 40 of the region’s 48 economies implementing at least one reform, compared to the high of 37 economies two years ago.

In the period covered by this year’s Doing Business report, Africa accounts for more than a third of all reforms recorded globally. In addition to recording the most reforms ever, this year also marks the highest total number of reforming economies in Africa, with 40 out of the region’s 48 economies undertaking necessary reforms.

Five African economies – Togo, Cote d’Ivoire, Kenya, Rwanda, and Djibouti – are among the top 10 most improved economies globally. Rwanda leads the reform count with 7 reforms; Djibouti and Togo with 6 reforms each; while Cote d’Ivoire, Gabon, Guinea, Kenya, Mauritius and Sudan claim 5 reforms each. Mauritius lands 20th position globally and is the only African economy in the top 20 of the index. Together with Rwanda, these two are the only African economies in the top 30 of the index.