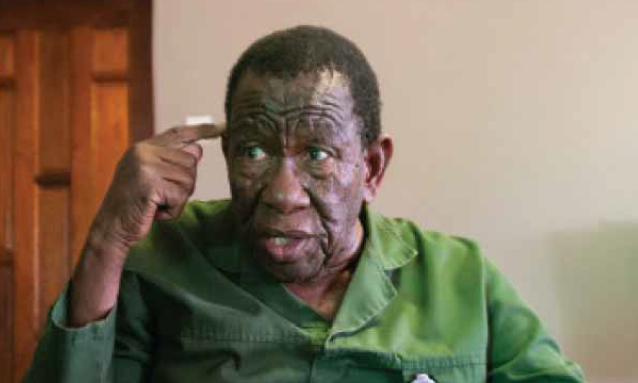 Bogadi or bride’s price is not part of the Setswana culture according to former Bakwena regent – also former president of the Customary Court of Appeal – KgosiKwena Sebele. Reacting to The Midweek Sun article Bogadi must fall, which appeared on the September 26, 2018 edition, Kgosi Sebele told the publication in a telephone call;

“I always tell people that Bogadi does not feature anywhere in our culture. You guys should stop consulting the wrong people about this issue. Look at how people don’t marry these days over Bogadi which has got nothing to do with us!” he said, and invited The Midweek Sun for an interview on the matter.

When The Midweek Sun team visited him in Molepolole, the traditionalist spoke candidly;

“I want someone to come forward and challenge me after reading what I’m about to tell you now. People have been ripped off, it’s enough. Bogadi ga se Setswana,” said the free spirit.

73-year-old Kgosi Sebele says that growing up, he learnt Setswana history from his forefathers and parents. He maintains that Kgosi Kgari Sechele I should be blamed for the introduction of Bogadi.

“He had many wives, possibly more than five as well as concubines, something that did not sit well with the missionaries around 1885.

They told him it was taboo and that as a Christian convert, he had to abandon all the women and remain with only one. Other believers followed suit and renounced polygamy,” he says.

He adds that according to Setswana culture, when a young man starts showing signs of puberty and interest in a young woman, arrangements are made for the two to be kept inside a hut where they are supposed to have sex and it is done to check whether they will conceive. He calls this the “fencing period”or engagement in modern English. He says that if during that fencing period, the couple manages to have a child, when the elder goes to ask for “Sego”, or for the girl’s hand in marriage, her family would be thanked with a cow.

“The charging of eight cows and whatever is happening is not our culture but selfishness.

In our culture, men go first to ask for the girl’s hand in marriage. From there, they come with the cow or cows based on the number of children. Then the couple is married.” What is lawful, he says, is patlo ya banna le basadi.

His take on the prevailing situation is that Batswana have lost their culture.

“That’s why there are two contracts. People do both the Common Law and Customary Law marriages, which is total confusion. It’s like getting married twice.

Choose the one you want, and decide as a couple, not external influences. Weddings are done to show off. Couples are in debt because of demands like Bogadi. Girls will remain single for a long time,” he warns, adding that Bogadi has even turned into a business.”

Citing a case he once handled, Kgosi Sebele said a woman from Ramotswa once said she was divorcing her husband because he wanted too much sex from her.

“The man in turn said he wanted his cows back because monna yo o nkgang o nkga le ditsagagwe,and I endorsed his request,” he says.

His advice is that Batswana should go back to the crossroads. “Molao sekhutlo, morwa mmoelwa yo o sa boelweng ke maleng,” he says.

NB: Bogadi (in southern Africa) an African custom by which a bridegroom’s family makes a payment in cattle or cash to the bride’s family shortly before the marriage.

What’s your take on Kgosi Sebele’s assessment of Botswana’s modern day interpretation of bogadi? Whether you agree or disagree, we’d love to here your views!