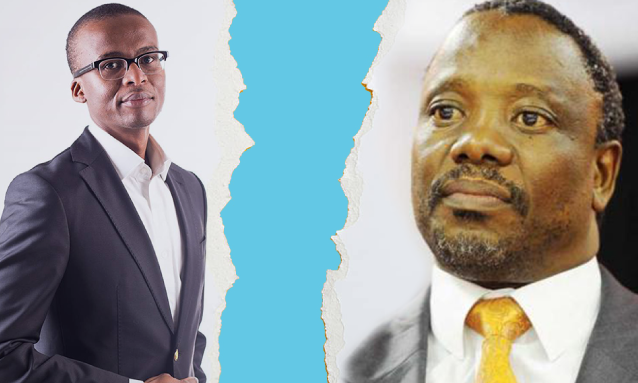 Opposition Botswana Congress Party (BCP) is said to have hit a snag in their efforts to court Alliance for Progressives (AP) into a partnership ahead of next year’s the General Elections. BCP President, Dumelang Saleshando, who has made no secret of his desire to join forces with AP rather than Botswana Movement for Democracy (BMD), is said to have approached the AP leadership to explore the possibility of a coalition.

Opposition party sources have revealed that after being disturbed by the political storm they are going through inside the Umbrella for Democratic Change (UDC), BCP had approached AP for a possible coalition but the two failed to agree on some conditions. AP President, Ndaba Gaolathe (pictured above, left) said recently at a press briefing that anyone who wants to work with them must approach the party elders.

“So far, our elders have not informed us if anyone approached them because those are the people who give us direction,” said Gaolathe.

BCP is said to be uncomfortable with the involvement of AP elders in the negotiations. When BMD parted ways with Gaolathe and the subsequent forming of the AP, the BCP labelled them hypocrites who were not honest when they were being reconciled with Sidney Pilane’s faction. AP has recently indicated that they are not ready to work with the UDC in its current form.

Since joining the UDC, BCP has had issues with BMD, which started with disagreements regarding UDC President Duma Boko’s running mate in the 2019 elections. The BCP wanted Saleshando to be Boko’s running mate, while the BMD (at the time led by Gaolathe) wanted the status quo to remain as it was in 2014. At the end, the parties settled for two vice presidents, something that BCP wanted repealed after the BMD split leading to the birth of AP.

Currently, BCP and some sections of BNF want BMD to be expelled from UDC, a decision dismissed by Boko who said no one has the powers to expel a contracting partner. BMD President, Sidney Pilane (pictured above, right) has also dismissed the suggestion that some people want to expel him and his party from the UDC;

“I am not a member of the UDC and an organisation has no power to suspend or expel a person who is not its member. I participate in the UDC in my capacity as President of the BMD, on the instructions of the latter Movement as its representative in the NEC of the UDC and in no other capacity.

The UDC is not competent to decide who may represent the BMD in the UDC NEC, nor is it empowered to suspend or expel the BMD from the UDC. The relationship inter se of the parties which are members of the UDC as a coalition is a contractual one, and the agreed UDC constitution does not give any contracting party or parties the authority to suspend or expel another contracting party,” he said.

He called on those who are not happy within the UDC to freely leave the alliance.

BCP is currently divided on whether to leave the UDC or stay put amidst the political differences they have with their contracting partners, especially the BMD. Some BCP Parliamentary candidates have revealed that they are against pulling out of the umbrella, as they have already printed campaign materials.

“Why can’t we sit down with Sidney Pilane and solve our differences because this is not helping anyone at all,” revealed one of the candidates who chose to remain anonymous.

BCP and BNF have drawn up a countrywide political rallies programme during which they will address members together but this is said to not sit well with some who feel that the BMD and BPP should also be included. Efforts to get comment from BCP Publicity Secretary Dithapelo Keorapetse hit a snag, as he did not respond to the question sent to him through WhatsApp.

Source: The Patriot on Sunday