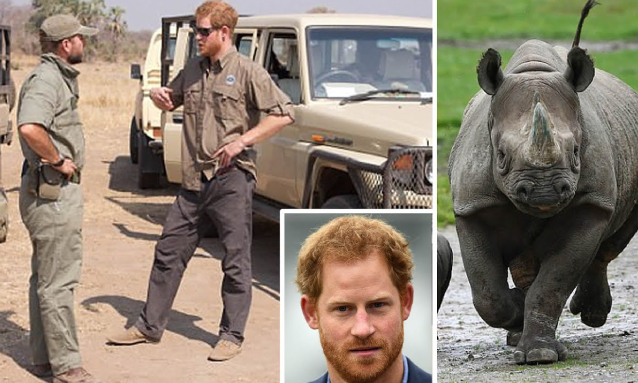 The Duke of Sussex has returned to his beloved Botswana to catch up on the work of a rhino charity he supports. Harry travelled to the country without wife Meghan earlier last week to meet senior staff and workers from the organisation Rhino Conservation Botswana (RCB). Botswana is helping to safeguard the continent’s population of black and white rhino and the duke takes a keen interest in the RCB’s work as its UK patron.

“The Duke of Sussex is on a private working trip to Botswana, to join the annual general meeting for Rhino Conservation Botswana in his capacity as patron.” – Kensington Palace

It is understood Harry attended a meeting with senior last Wednesday and later that day toured a project in a village.The private trip follows a similar visit he made to the country in January when he carried out another fact-finding mission to learn about the charity’s latest developments.

Botswana is a country Harry knows and loves and where he took his wife in the early days of their relationship. Meghan’s engagement ring not only features diamonds from the personal collection of Diana, Princess of Wales, but a stone from Botswana.

“The Duke of Sussex is on a private working trip to Botswana, to join the annual general meeting for Rhino Conservation Botswana in his capacity as patron. He attended the board meeting in Maun and an RCB community project in Xarakao village.”

It wasn’t clear how long Prince Harry’s Botswana for.