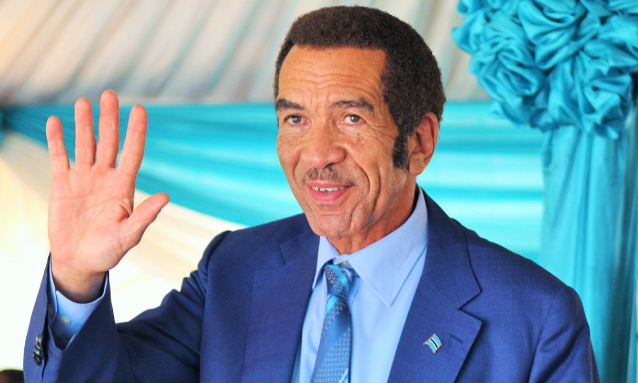 Botswana’s former President, Ian Khama, is lending his hand to help African countries scale up the fight against the illegal wildlife trade that’s negatively impacting the continent’s biodiversity and economy.

The fourth president of Botswana will work with the international community to combat the trade and its drivers through the Elephant Protection Initiative (EPI), a coalition of 18 African countries that’s working to tackle elephant poaching and shut down the remaining global ivory markets.

Dr. Khama took up the new role after agreeing to become a Distinguished Fellow for global non-profit organization Conservation International (CI), which is the co-secretariat of the EPI. The former President has been a CI board member for the last 19 years, pushing for conservation initiatives in Africa and beyond. In his new role, Dr. Khama is expected to significantly raise the global profile and impact of EPI, which was launched in 2014 with Botswana being a founding member when he was still President together with Gabon, Chad, Tanzania and Ethiopia.

The majority of Africa’s surviving elephants – both forest and savannah species – are in EPI countries and face growing threats of poaching and trafficking. In his role, Khama will also continue to provide leadership in ensuring tourism supports the continent’s economic prosperity as well as environmental and cultural heritage. This announcement comes as Governments and conservation experts from Africa and around the world are preparing to converge in London in October for the Illegal Wildlife Trade (IWT) Conference.

The EPI will be presenting its plans to save Africa’s elephants, protect biodiversity, and deliver tangible and sustainable benefits to communities. As a Distinguished fellow, Dr. Khama will also help African countries forge a more sustainable development path that involves boosting socio-economic progress of the people without destroying natural resources.

He will do so through the platform of the ‘Gaborone Declaration for Sustainability in Africa’ (GDSA), an initiative bringing together a dozen African countries to mainstream sustainable development principles and practices in their development agenda. CI is managing the GDSA secretariat on behalf of the Botswana government and provides technical and financial support.

Dr. Khama played a pivotal role in establishing the GDSA initiative in 2012 when he was still President and is expected to help increase the number of member states and its global profile and impact. Conservation International’s Chairman, Peter Seligmann said in a statement that President Khama’s role as a CI Distinguished Fellow taps into his vision, commitment and institutional knowledge to help preserve Africa’s rich natural resources.

For his part, CI’s CEO, Dr. M. Sanjayan said the former Botswana leader embodies the approach of community-led conservation that delivers the most benefits to both people and ecosystems. He added that Dr. Khama has also successfully led environmental initiatives in Botswana and Africa.