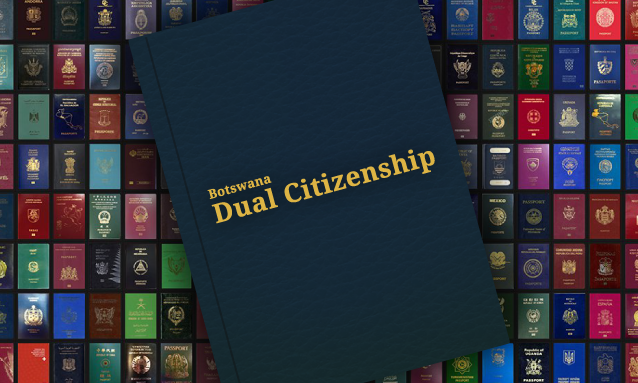 This isn’t anything new as this has always been the case. Currently, someone born to a Botswana citizen and a non-Botswana citizen is recognised as having two nationalities and therefore, has dual citizenship until the age of 21. However, by the time that person turns 21 he or she is to choose one of the nationalities and renounce citizenship of the other. The process must begin at the age of 20 when he or she must inform the Ministry of Nationality, Immigration and Gender Affairs in writing of their intention to renounce their citizenship.

Understandably, this is met by heavy criticism, as both child and parents find this decision upsetting, which begs the question – why doesn’t the government simply request that parents choose their child’s nationality at birth? The simple fact remains; people with a non-Botswana parent have two nationalities and that fact will never change, regardless of whether they renounce one citizenship or not to satisfy the government. Making someone renounce one of their nationalities must be upsetting, as I imagine it feels as though they are rejecting one of their parents or favouring one over the other. But it also seems unfair for a child to choose a nationality when they turn 21 because in truth, having dual citizenship from birth up until 21 is not very useful. Many children are rooted to one country due to school/college/university; it’s when they turn 21 does dual citizenship become an advantage because they are finished with their studies and free to travel and explore the world.

Recently, His Excellency, President Masisi’s has been clear about his intentions towards his quest for foreign investment by proposing to relax immigration laws. This is a huge step for Botswana, but there’s also mixed messages with regards to Botswana’s relationship with foreigners. The President wants to encourage foreign investment, yet some organisations conduct tender processes stipulating responses must come from 100% Botswana owned companies. In reality, what foreign investor isn’t going to own at least 1% of a company they own or have invested in? Some organisations also list job vacancies stating the positions are only open to Botswana citizens. It’s fine if that’s an unwritten policy, but once written for all to see it could give the impression foreigners are not wanted.

So how is President Masisi going to attract foreign investment if there are local organisations that won’t do business with companies that have foreign ownership? How will foreigners feel about settling in Botswana with their families knowing their employment opportunities are limited? Of course, these organisations are trying to create opportunities for Batswana, but the perception does not make Botswana attractive to the very audience President Masisi is targeting. It’s simply counter-productive and leaves me feeling very perplexed because the only compromise is allowing dual citizenship.

It’s 2018 and as each year passes, the global community we live in shrinks and becomes more and more apparent. Botswana’s refusal to allow dual citizenship is even more perplexing because Botswana is very much a multiracial country. At least two of the major contributors to our economy (diamonds and tourism) are heavily dependant on foreign influences. Even as far back as 1965, Sir Seretse Khama was clear about his vision to build a multiracial and independent Botswana, and yet over half a century later Botswana hasn’t introduced dual citizenship. Why?

I read a discussion on the quora.com website in which someone asked the question – why don’t some countries allow multiple citizenships? A historian and PhD candidate responded by saying “it’s usually an issue of loyalty – or perceived loyalty.” He then went on the site Singapore as a good example of how the perception happens.

“Singapore is, obviously, a very small city-state by world standards. The view of the government has been that everyone who lives there needs to work to build the country up to be the success story that it is. Allowing dual citizenship, the argument runs, would risk everyone leaving the country when times get tough, which isn’t seen as a sensible way of addressing whatever the difficulty may be.”

Is this the reason Botswana doesn’t allow dual citizenship? If so, it seems illogical for a country needing and wanting foreign support.

So what are the advantages of dual citizenship?

You get two passports.The obvious benefit is travelling becomes easier depending on which passports you have. In some cases, there isn’t the need to apply for visas and endure rigid screening processes. Dual citizens have right of entry to both countries, which makes it easier to visit family or do business in either country.

You can own property in either country.In some countries property ownership is limited to citizens. A citizen can buy land and property for either residential or commercial purposes. Citizens can also choose which country to spend their retirement. Yes, they may not have lived and worked in that chosen country and therefore not paid taxes, but they will contribute to that country’s economy with all the expenditures.

Admittedly, dual citizenship is complex, and it’s important those subject to dual nationalities understand the benefits and obligations. But realistically, I don’t see dual citizenship being in any way a disadvantage to Botswana. The country needs foreign investment and the Botswana government wants those investors to bring with them business and industry, set up longstanding companies, provide employment and boost the local economy. This is a long-term, if not a lifetime commitment. Dual citizenship would make certain processes and business conduct are a lot easier, but also foreigners would set up home and start families. Yet for the foreseeable future, they will never be able to truly call Botswana their home.

Many Batswana travel and study in different countries… I did. I lived in the UK for 13 years; it wasn’t planned, but I stayed there so long because I met my husband. I could have applied to become a British citizen, but I’m a proud Motswana, I didn’t want to have to renounce my Botswana citizenship or risk losing it. Let’s be honest, many don’t share the same caution as I do and have obtained dual citizenship on the sly. The demand for dual citizenship from Batswana has driven many to drastic measures, which could become a problem if found out.

Having a Botswana passport in the UK was is in no way beneficial. I had to pay almost three times what British citizens pay for my college courses and the visa applications were also costly. I’ve been back in Botswana for over four years now, which means my 13 years in the UK count for nothing, as my permanent leave to remain permit has expired. I’ve been away for so long that I am once again a foreigner in a country I called home for 13 years. It will now prove very costly and troublesome whenever my husband wishes to travel back to the UK to visit family.

If the government worries that dual citizenship will result in a mass exodus of Batswana, I maintain it needn’t worry. The majority of Batswana I met while I was living in the UK were keen to return home. In my experience, there’s a much larger percentage of Batswana who are proud and patriotic. In my humble opinion; allowing dual citizenship would provide flexibility and opportunities for Batswana and empower them. They would leave and return home, bringing with them new skills and new ideas, which in my mind is equally as valuable as any foreign investment.