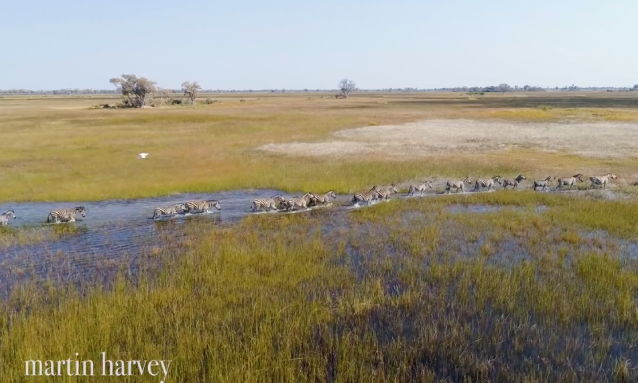 Though the last zebra to have migrated on the path would have died 50 years ago, a new generation has started the same massive historic trek.

Drenched in water and completely covered in greenery, it’s nearly impossible to imagine Botswana’s Makgadikgadi Pans as an arid landscape. A region marked by seasonally visible, horizon-bending salt flats connected by the Kalahari Desert’s sandy terrain, the Makgadikgadi Pans merge to form the largest contiguous salt flats in the world, outsizing the singular Salar de Uyuni in Bolivia. Although travellers seldom visit during the January to April rainy season, it’s when the Makgadikgadi Pans are lush and wet, transforming the land into a haven for herbivores.

Botswana’s Central Kalahari Desert Game Reserve was once home to one of Africa’s largest land migrations. Nearly 500,000 wildebeest stomped through its centuries-trodden tracks, migrating as far north as the Makgadikgadi Pans in search of the area’s plentiful fertile wetlands. This historic migration was akin—and perhaps even larger—to the magnanimity of the annual Serengeti wildebeest migration.

Shortly following Botswana’s independence in 1966, however, the landlocked nation entered into a lucrative contract with the European Union to supply European nations with cattle for consumption. With little industry already intact, Botswana’s flat terrain made livestock farming a natural and efficient means of economic benefit. Unbeknownst at the time, the contract would soon threaten one of the country’s yet-to-be-tapped industries: wildlife tourism.

Due to Botswana’s profusion of game, the EU required the nation to separate cattle from wildlife, specifically buffalo, known harbingers of foot and mouth disease. With nearly impossible transmission rates to humans, the EU’s main concern stemmed from infected meat potentially carrying the disease to cattle in contract countries, leading the EU to disallow meat from non-disease-free zones.

To eschew this problem, Botswana erected a vast, seemingly endless system of cattle fences, separating livestock from buffalo—and, by default, wildlife like elephants, giraffes, lions, leopards, and zebras—to avoid transmission of the disease. Although numbers are unknown, it’s estimated that hundreds of thousands, if not millions, of wildlife died following the establishment of Botswana’s fences, as the barriers blocked species from essential year-round water sources. Grazing herbivores, like the wildebeest venturing from the Kalahari Desert north to the Makgadikgadi Pans, may have felt the worst effects. Zebra populations also suffered, as they were no longer able to complete their annual treks, seemingly eradicating centuries worth of migratory patterns. 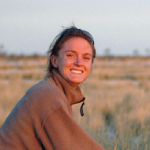 In a recent study, Dr. Hattie Bartlam-Brooks (pictured) of the Royal Veterinary College, University of London,uncovered data suggesting zebras can recover former routes if physical barriers like fences are removed. As the first scientist to discover the restored Okavango Delta to Makgadikgadi Pans zebra migration of several hundred animals, Dr. Bartlam-Brooks’ work suggests that the migration’s resurgence was only possible following the removal of the north Nxai Pan veterinary fence in 2006, which blocked the route entirely from 1968 to 2006.

Since 2014, Dr. Bartlam-Brooks has been joined by Dr. Emily Bennitt of the Okavango Research Institute at the University of Botswana to try and understand the triggers and mechanisms governing the migration process.

“Migrations are easily disrupted by anthropogenic activity, but evidence from Botswana indicates that migrating populations can recover their functionality if barriers are removed.”

Because zebras have an average 12-year lifespan, the zebras of today were not alive in the late 1960s when the Nxai Pan veterinary fence was erected; yet following the removal in 2006; the migration is exactly how it was generations before. Mirroring the findings of Dr. Bartlam-Brooks and Dr. Bennitt is a Cambridge study and the first-ever documentation of a similar cross-border, long-distance zebra migration from Botswana’s Chobe River south to Nxai Pan National Park, a protected area set just above Makgadikgadi Pans National Park. The evidence of this separate migration suggests the species harbour a conserved memory of ancient routes that may be genetically encoded, which may explain how the zebra of the Okavango Delta to Makgadikgadi Pans migration could re-establish their route after a decades-long generational lapse.

Rowing the business of conservation

While economic need drove the development of the cattle walls in the first place, tearing them down may provide just as strong an economic impact for Botswana. The Chobe River to Nxai Pan National Park zebra migration is now the longest known mammal movement in Africa. In fact, the round-trip, straight-line journey of over 300 miles outdistances the widely coveted and well-known seasonal wildebeest journey in the Serengeti ecosystem, which attracts thousands of tourists each year.

Even well-established groups are astonished by how this new migration may change Botswana’s tourism industry.

“Having been involved in tourism in Botswana for as long as I can remember, I thought I knew everything about the country,” says Caren Banks, who works with Rothschild Safaris.

“That was before I discovered the amazing zebra migration to the Makgadikgadi Pans.”

The company now offers the only close-up overnight views of the migration to tourists, either at Jacks Camp or Meno A Kwena. Travellers usually visit Botswana during the dry season from May to September, but in-the-know visitors are braving muddy conditions to visit during key points of the migration, which occurs in the rainy season from January to April.

It’s then that visitors can spot animals scouring the Makgadikgadi for fresh grass—evidence that while human influences often negatively impact animal migrations, the effects can be reversed if wildlife protection becomes a priority.