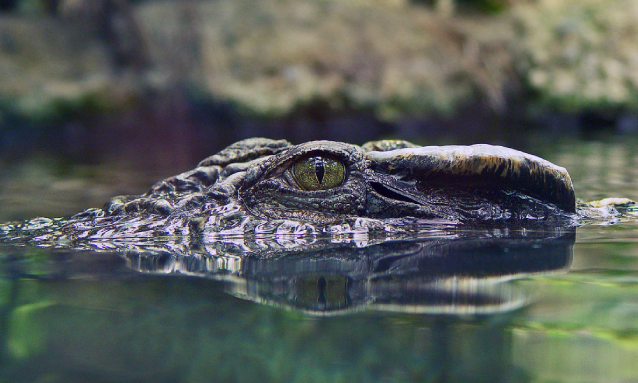 It may sound like a suicide mission, but the latest attraction for adrenaline junkies is… swimming with crocodiles. Tourists pay more than £5,000 to dive into a river in Botswana to swim alongside 12ft-long Nile crocodiles.

The creatures, which weigh up to half a ton and can kill a man with one snap of their massive jaws, are responsible for killing hundreds of people every year. The experience is organised by tour operator Big Animals, which assures thrill-seekers that the cold waters of the Okavango Delta, where the trips take place, make the crocodiles ‘lethargic and slow’.

Tourists pay more than £5,000 to dive into a river in Botswana to swim alongside 12ft-long Nile crocodiles. The creatures can kill a man with one snap of their massive jaws. Divers are urged to descend quickly below the surface – the crocodile’s‘kill zone’ – and ensure they are not seen as a silhouette against the sun.

Wearing scuba gear, the group follow an expedition leader behind a crocodile, and when the time is right, one by one they will swim forward to be alongside it.

British holidaymaker Tony Rowlands, 62, braved the dive and emerged not only intact but ecstatic. He said:

“It was wonderful. You can swim up close to this massive prehistoric animal, knowing he could tear you to shreds in seconds but he doesn’t, and it’s wonderful.”

Wearing scuba gear, the group follow an expedition leader behind a crocodile, and when the time is right, one by one they will swim forward to be alongside it

In a small team accompanied by crocodile ‘spotters’ and experienced divers familiar with the territory, he went out each morning at daybreak in a flat-bottomed boat. Mr Rowlands, who owns property companies in Liverpool, said:

“We were quiet, looking all the time for a big croc warming himself on a riverbank. The big old ones are the best – they can be around 50 years old and they are scared of nothing and have no reason to be skittish. They’re the last of the dinosaurs for a reason. They’re survivors and they’re clever.”

Remembering the moment he swam alongside a crocodile, the former Royal Navy sailor said:

“I thought to myself, I should be more worried than I am – this is completely insane.”

“This is for people who want the ultimate experience but who are also experienced divers.”

Before the dive, tourists have to sign a document waiving the Botswana government and Big Animals of responsibility should anything go wrong. Hopefully it won’t cost people an arm and a leg!

Swimming with crocodiles isn’t a new concept, as seen in the video above. As far back as 2012 BBC’s Ben Fogle and the rest of his expedition carried underwater crocodile studies. Once underwater Ben was astonished when a crocodile they had been following showed no interest in them whatsoever. It was a brilliant moment for the team who were allowed to study the crocodile’s eyesight up close without any objection from the reptilian killer.