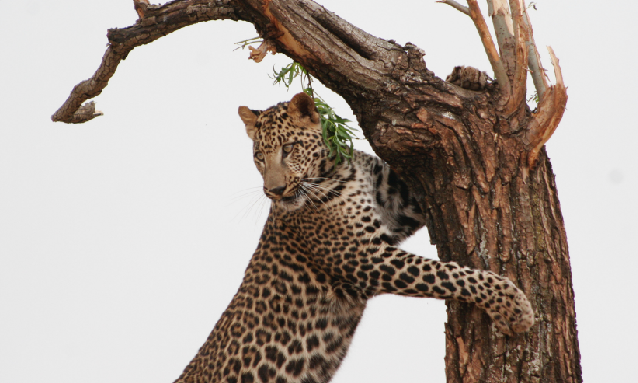 To go in search of a vanishing river sounds like some grand Arthurian quest, but that was my plan as I flew over the sun-baked deserts of northern Botswana in a tiny, single-prop plane. Savute means “mystery” in the local Bayei language, and it’s a fitting name for a baffling 60-mile-long channel, which over the centuries has flowed and then dried up apparently at whim.

When in 1851 David Livingstone passed through this arid region – which today lies in the southwest corner of the vast Chobe National Park – he came across the river, yet just two years later it had disappeared. More recently, the Savute Channel merrily flowed from 1967 to 1982, then stopped for 28 years, then returned in 2010 with the suddenness of a flash flood.

One fascinating consequence of this fickle trickle is how wildlife has adapted to the cycle in extraordinary ways. While Botswana is renowned for offering safari superlatives, it is Savute that gets its connoisseurs and naturalists truly excited. In the words of Brad Bestelink, a Botswanan (sic) filmmaker who documented the region for the recent National Geographic mini-series Savage Kingdom,

“Never in my life have I witnessed such an intense and focused period of predator interaction and behavioural firsts.”

More of his words feature in Savute, Botswana’s Wildlife Kingdom, a coffee table book from the award-winning British photographer James Gifford, which captures the trauma when a river runs dry – in particular, some astonishing images of leopards that became adept at catching 5ft-long catfish trapped in muddy holes as the waters receded.

Their cubs proved equally resourceful, learning how to kill great white pelicans, while wild dogs devised a way of hunting impala by chasing them into the river. Savute is also famous for having lions that can bring down a full-grown elephant – a scene Gifford captures with brutal candour.

Today the Savute Channel is once again dry – who knows for how long – but that doesn’t mean there is nothing to see. Thanks to a network of waterholes, both natural and man-made, this unforgiving pocket of the Kalahari Sands guarantees remarkable encounters with wildlife, particularly in the dry season from May to October.

At the superbly remote Savute Safari Lodge I sat on a deck just 80ft from a waterhole where elephant, giraffe, lion, buffalo, kudu, zebra, jackal, hyena, warthog and marabou storks all competed to grab a life-saving drink. It made stressful viewing.

An elephant can consume up to 44 gallons of water in a day, and the bullying jumbos are reluctant to let anyone else slake their thirst. Only lions command their respect, and it can move you to tears to see a young giraffe, so vulnerable when it lowers its long neck to drink with legs splayed wide, desperately trying to get near to a muddy puddle but then losing its nerve.

“That did upset us,” admitted my guide, Metal Mosheti, who clearly remembers the day the Savute Channel flooded back in 2010.

“It sounded like a whirlwind,” he recalled as we drove along a dried-up bed still littered with bones left from the drought that followed four years later.

“Suddenly there were water birds everywhere,” he explained, “and red lechwe” – a semi-aquatic antelope. Over the next two days, Metal treated me to a cavalcade of bucket-list wildlife sightings, including a mean-as-hell pack of wild dogs out on patrol and a hyena den with weeks-old puppies.

Water is so vital to this desert nation, almost as large as France, that the word “pula” – which means “rain” in the Setswana language – serves as both a greeting and the name for the national currency.

“Will it be raining in Leroo La Tau?” I asked Metal, as I prepared to take a 65-minute flight south to this riverfront lodge on the western border of the Makgadikgadi Pans National Park. “I hope so,” he replied.

Set beside the largest collection of saltpans in the world, the Boteti River started flowing again in 2009 – after a 28-year break. Its unexpected return was a stroke of fortune for Desert and Delta Safaris, which had bought the property the year before. Now its guests relax in glass-fronted chalets with private terraces, admiring the lush green banks and an engrossing parade of wildlife that comes to enjoy the river’s life-giving waters.

The Makgadikgadi Pans form the backdrop for the second largest migration in Africa, when some 25,000 zebras, along with wildebeest, move between the Boteti and rich grasslands that appear following the December rains. The peace beside the river is astonishing – on a sunset game-viewing cruise, in which ours was the only boat, I glided past hippo, elephant, lion and giraffe, plus a rich birdlife ranging from nimble-footed African jacana to fish eagles and the Goliath heron.

The chance to view wildlife from the water is one of Botswana’s trump cards, and the introduction of blissfully quiet, electrically powered riverboats at my next stop, Chobe Game Lodge, was an encouraging development. Set beside the country’s northern border with Namibia, this venerable property has pioneered some impressive environmental and social initiatives – 95 percent of its waste is recycled and all 17 of its professionally qualified guides are women.

“What would you like to see?” Connie Moremong asked shortly after I arrived. “A leopard?” I replied cheekily.

The next day she found me one, along with some puku (a water-loving antelope), a serval and elephants galore – at the last count, Chobe National Park was home to some 70,000. Now that is service, and indicative of how in Botswana the future of the safari is looking very positive.

Four years ago, its government banned commercial hunting, and there is now a strong commitment to conservation. The attitude of guests is also changing, with less emphasis on the dream of seeing the Big Five – an anachronistic hangover from the days when big game hunters sought out lion, leopard, rhino, buffalo and elephant.

“Travellers are more sophisticated now,” reflected Lodge Manager, Johan Bruwer. “They watch documentaries, do research on the internet and care about environmental issues.”

Compared to the hellish struggles of Savute, life beside the constantly flowing Chobe River seems idyllic – but it is nothing like the veritable Eden at my final touchdown in the much-lauded Okavango Delta. Home to 95 per cent of the water in Botswana, this is the nearest thing to a happy place for its wildlife.

Here the done thing is to be punted through its maze of narrow channels in a mokoro (canoe) at sunset, admiring the towering papyrus and enchanting birdlife. At Xugana Island Lodge, where just 16 guests enjoy a 60,000-hectare private concession, the treats include bush walks, night game drives and dinner à deux on a pontoon floating under the stars.

Once pachyderms lose their teeth, their days are numbered – but in the Okavango they can enjoy a few more years by eating its soft vegetation. It’s a rare beneficial adaptation I’m pleased to hear about, but there’s no escaping the prevailing law of needs must. On a boat ride to Jeri-Jeri, a tiny island ringed with crocodiles and hippos, I was thrilled to find its water berry trees packed full of nesting storks, egrets and herons like some glorious avian maternity ward.

“They’re safe now,’ Ishmael sighed, “but a few years ago the water dried up and baboons just walked across and massacred the chicks.”

It was a dismaying sight, but these are the intractable rules of nature – and why the African bush offers one of the greatest travel experiences on the planet. Out here the death of one creature invariably secures the survival of another, and the river of life – for all its capricious stops and starts – always rolls on.